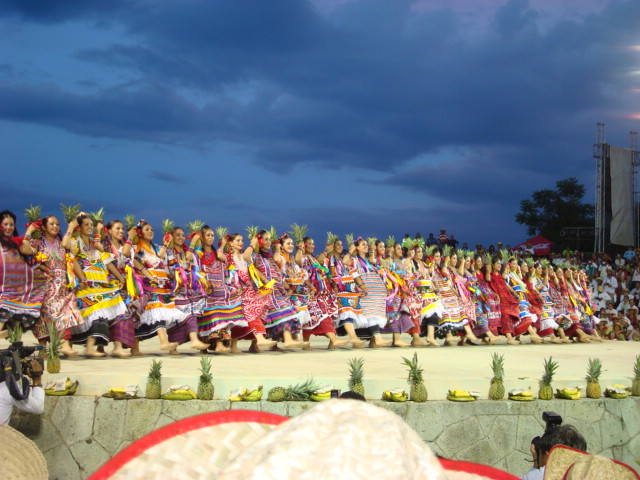 Festival season has kicked off. Many of you associate the word ‘festival’ with big dance events like Sziget or Lowlands and with people wearing oversized sunglasses, light summer dresses or trendy shorts, dancing in the hot summer sun. But festivals come in many different ways: they are celebrated throughout the world, with different purposes and are indeed a phenomenon of all times. Today, a very old and interesting festival has begun: the biggest folklore festival of the Americas.

The Guelaguetza festival takes place in Oaxaca, one of the Southern provinces of Mexico. It dates from the pre-Columbian era and used to be in honor of the corn god. But like many other indigenous events and cultural expressions, it has been adapted to and mixed with Christian traditions after the Spanish conquest. The human sacrifice of a young girl for example, is no longer part of the event. This former beheading used to represent the separation of a mature corn head from the mother plant. Today however, the celebration is in honor of the Virgin del Carmen and is a colorful display that reflects the cultural diversity of Oaxaca.

This Mexican state is home to many different groups of indigenous people: 34.2 percent of the state’s inhabitants are from indigenous origin and over 300.000 people are monolingual in a wide variety of native tongues, with many others are bilingual in Spanish. Sadly but perhaps not so surprisingly, Oaxaca has long been neglected by the federal government of Mexico and it might be argued that today that is still the case. It is one of poorest states in Mexico, lacking good infrastructure and educational facilities. According to the 2012 National Report on Poverty and Social Development in Oaxaca, no less than 64.7 percent of the region’s inhabitants lived in poverty in 2010. A staggering 29.8 percent lived in extreme poverty, lacking basic facilities such as food.

Oaxaca has long been neglected by the Mexican government.

After a severe earthquake in the 1920s, the festival of Guelaguetza was reorganized as a statewide cultural event in order to rebuild the morale and pride of the native people. Since then, the event has grown bigger and bigger and now attracts many tourists from all over the world. The audience, sitting in a stone stadium on a hill, can expect quite a show. Delegations of the different indigenous cultures of Oaxaca express their traditions, hopes and sorrows through the art of dance. The word Guelaguetza stems from the Zapotec language and means “reciprocal exchange of gifts and services”. This idea of sharing and giving becomes clear when one attends the festival. At the end of each dance, each delegation throws their ‘guelaguetza’ to the audience. Some throw corn tortillas, others small fruits or sweets.

One of the dances which impressed me very much involved a group of young native girls dressed in bright costumes, dancing with … pineapples. At the end of the dance I remember thinking: “No… surely they wouldn’t…”. But before I knew it, the pineapples were thrown fiercely into the audience and there was nothing left for me to do but try to avoid getting hit by the flying projectiles.

Now that’s something you don’t have to worry about when you are in Sziget, right?