Taiwan: How Not to Communicate Negotiations 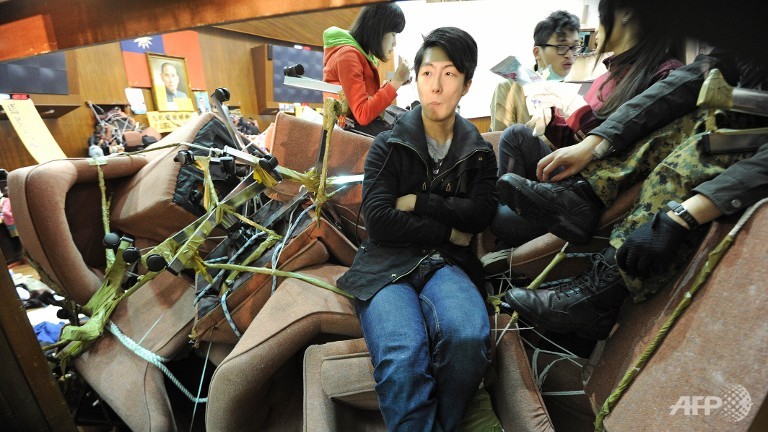 While the US and the EU continue their negotiations about the Transatlantic Trade and Investment Partnership (TTIP) under disputable circumstances, namely the lack of public oversight, negotiators should maybe take a look at Taiwan: The student-led mass protests give a striking example of what can happen if governments try to implement questionable trade agreements behind closed doors or even against the overt will of their populations.

President Ma of Taiwan had intended to push things through as inconspicuously as possible. The Service Trade Agreement (CSSTA) with neighboring China, signed in June 2013, was rushed through a joint commission before entering the parliament floor in order to speed up the process. The parliament was not to vote about the single parts of the agreement, but about the bulk of the agreement as a whole. The hearing was scheduled for Friday, March 19.

But on Wednesday things got out of hand. Around 200 protesters stormed the Yuan in Taipei, Taiwan’s legislature. Erecting improvised barricades they demanded the agreement to be scrapped and committed themselves not to leave the parliament hall until their demands were met. In the course of the following week the occupiers were accompanied by up to 20,000 people marching the streets of Taipei, clashing with riot police several times.

So what is this all about? Are these protesters fundamentally protectionist and opposing free trade in general? Well, certainly not. As Richard Chiou-yuan Lu, the Taiwanese lawyer whose essay in support of the protesters went viral on Taiwanese social media has put it:

“The truth is that if the counterparty to the agreement were a country other than China […] we would happily agree to the pact.”

And concerning the motives that brought protesters to the streets:

What is it that the Taiwanese fear? The CSSTA allows Taiwanese corporations to invest in certain service businesses in mainland China and vice versa. Taiwan has opened 64 businesses for Chinese investors, China even 80 for investors from the island. Sounds like pretty favorable terms for the Taiwanese one could say.

But it is not a short-term economic disadvantage that concerns the protesters. They are afraid that China will continue its tactic of gaining influence over Taiwan, which it still regards as defected province awaiting reunification, by increasing its economic leverage on the island. The protesters fear that an economic dependency from the mainland may prevent the island from taking further steps towards full independence. They see how China has broken promises of autonomy towards Hong Kong and how it exerts a growing degree of economic pressure on several African nations, and they do not want to become a similar case.

However, it seems that President Ma and his ruling Kuomintang party even share these concerns to a certain degree. But they also see the essential importance of the Chinese market for the service-orientated Taiwanese economy that is depending heavily on foreign customers. Since his election in 2008 Ma has followed a course of relaxing tensions with the big neighbor, culminating so far in the Economic Cooperation Framework Agreement, signed in 2010. Ma who was reelected in 2012 believes firmly that only a strong economy can guarantee Taiwan’s independence and that the looming conflict with China can only eased by cooperation.

The most surprising fact about this development is that many analysts believe that Ma would have actually succeeded in implementing the agreement (with some adjustments maybe), if only the negotiation process would have been transparent and open for public scrutiny. But instead the negotiations were held behind closed doors between dubious delegations. After the signing in June 2013, the Agreement was hastily pushed through the implementing machinery, up to the parliament’s floor last week, lacking some formal requirements of a due process. Ironically this was probably done to divert attention from the agreement and to prevent a big public reaction.

It is this manner of furthering the implementation that ultimately brought the people to the streets. The economic advantages were overshadowed by the feeling of being tricked into an ominous deal that would only serve particular interests.

Whether one regards the deal to be necessary and beneficial for Taiwan or disapproves it as a Chinese bid to increase its leverage over the island, he cannot be happy with the current state of affairs: a parliament that is shut down and thereby unable to scrutinize the question at hand, thousands of protesters effectively blocking the capital city and clashing with police, a government unable to govern: These are the consequences when the negotiations over a very sensitive and momentous agreement between international actors are not transparent and open to the public. It might be a valuable lesson to take for EU and US decision makers.

If you would like to know more about Taiwan, its internal challenges and its complicated relationship to China, make sure you read the Countryzoom on Taiwan in the current edition of Checks&Balances.

Are you interested how China uses its economic power to increase its influence in Africa? Than join the ClioConference on: “The Great Powers in Africa – Partners or Plunderers?”