”Risk It All”: Fighting ISIS with Pop Music 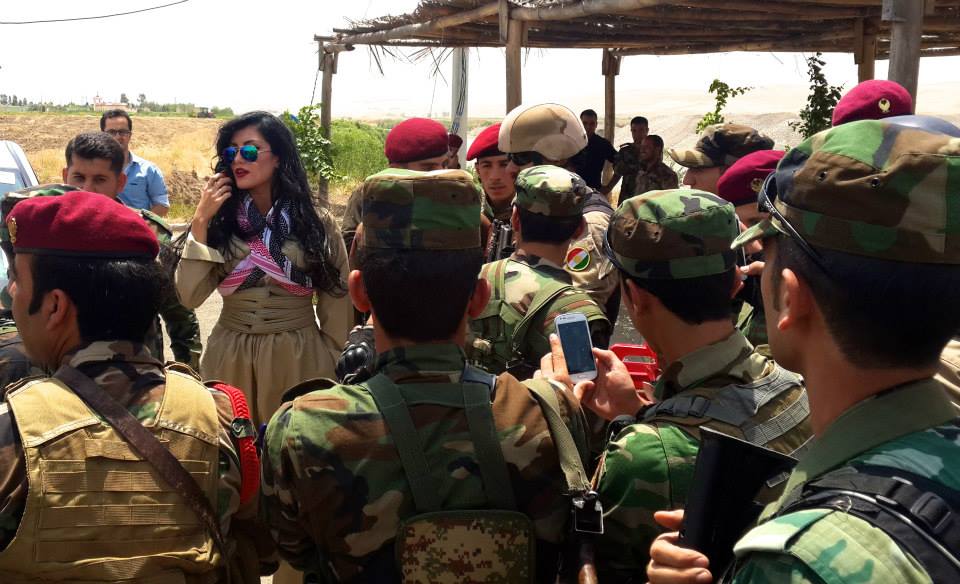 High heels, smoky eyes and Molotov cocktails. At first sight, those words do not seem to define a fighter. Born at the end of the 1980s in Iran, Kurdish singer Helly Luv (Helan Abdulla) has been constantly challenging our perception of what it means to take stand and fight. Facing extreme poverty and insecurity from a young age, Luv fled to Turkey to escape from Saddam Hussein’s regime, who heavily repressed the Kurds. Her family finally sought refuge in Finland where, Luv became more and more known thanks to her dancing and modelling skills. Her past experiences deeply moulded what makes her today an unusual artist.

Though she seems to follow the codes of commercial and superficial pop music, she is also determined to convey a real political message. One of her most popular and controversial song ”Risk It All”, released in the winter of 2014 received a lot of positive attention in Finland and in many Middle-East countries. Fearlessly exhibiting a military uniform and golden heels, Helly Luv holds her gun among Peshmerga male and female fighters in her latest song ”Revolution”, released in May 2015. Her creative work illustrates her eagerness to raise a voice towards universal freedom and Kurdish independence. The video clip was shot close to the Iraqi city of Mosul, standing only a few kilometres away from the front-line opposing Peshmerga army and terrorists from ISIS.

By pushing her political statements even further, the so-called ”Lion Girl” (BBC, The Guardian) inevitably faced more and more death threats from Islamic fundamentalists considering that she was a bad example towards Muslim youth, and especially young women. Furthermore, attacks from ISIS towards Kurdistan intensified after the release of the song. As a result, the artist is currently living under personal protection. Nonetheless, this does not stop her from making public appearances and participating in interviews all over the world. Indeed, she reveals her thoughts on the matter: ”In a way, I feel privileged to be attacked by ISIS because it means that the message is as strong as their weapons and their violence”.

Recently rewarded with the ”Youth of the Year” award in Finland, her success illustrates the unexpected, yet positive changes that pop artists can bring to a global scale if they decide to make political choices and include them in their music. Her increasing visibility in the media demonstrates that the audience is not as passive as it is sometimes portrayed; rather it can be a critical and proactive actor stimulating artists such as Helly Luv to intensify claims for freedom and widespread acceptance of different cultures and religions. In 2014, she created a non-profit organisation called Luv House whose aim is to provide help to people and animals throughout Kurdistan; she recently made a surprise visit to an orphanage and organised live performances in the capital of the Iraqi Kurdistan, Erbil.

As Helly Luv perseveres to raise awareness on Kurdish politics and the involvement of her people against ISIS through her music, she does not put aside the possibility to take part in the conflict one day, but on the battlefield this time: “If my life is at risk but I can get the message to millions of people then that is a privilege.”

You can listen to Helly Luv’s ”Revolution” here: