Lessons from Laclau: Are Donald Trump and Bernie Sanders Populists? 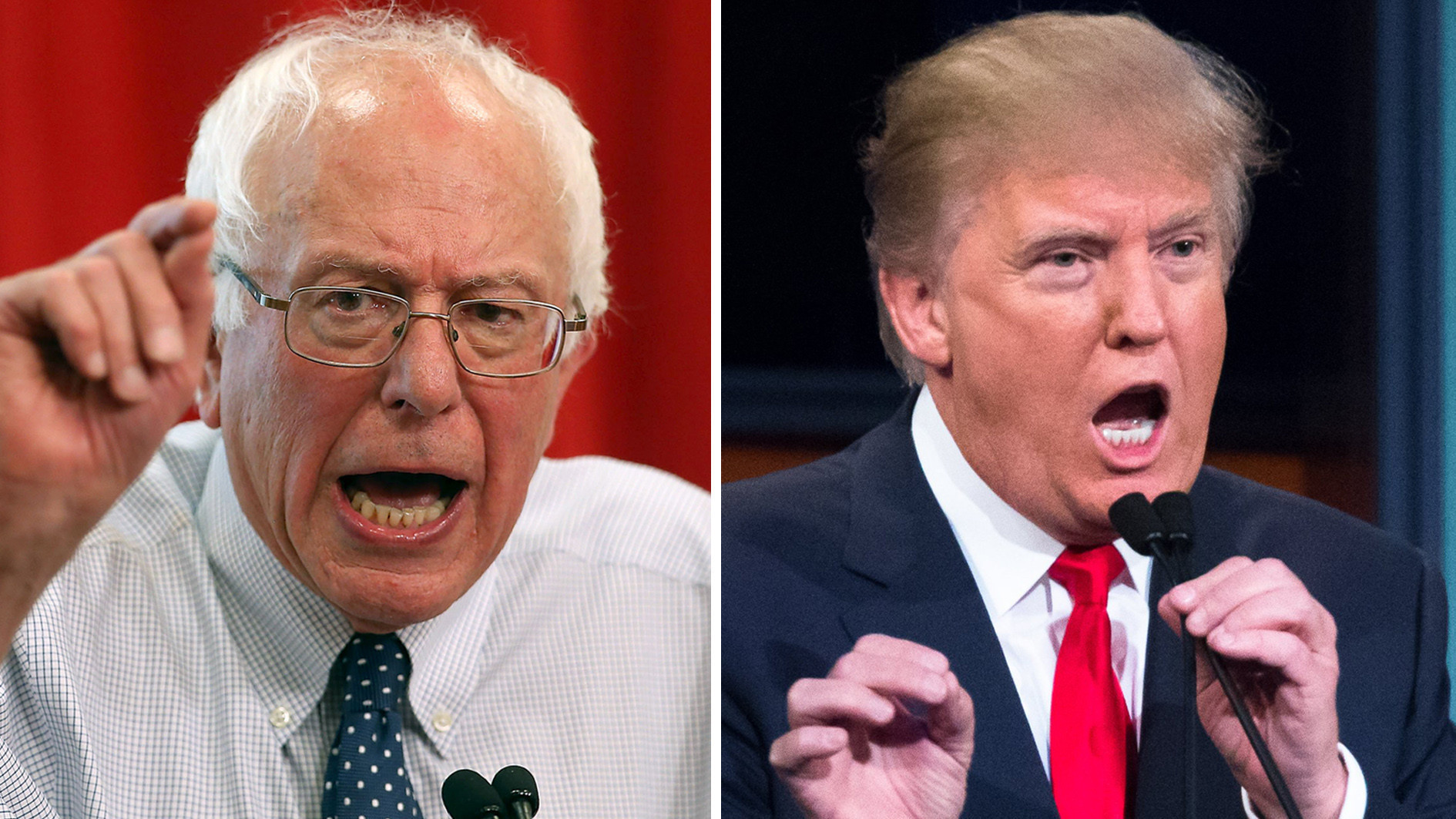 If you live in a cave, or are not aware of a little thing called the internet, then you may be excused for not knowing that in America there is currently a peculiar circus travelling from state to state, attracting crowds of screaming millennials, frustrated gun owners, and expectant babies waiting to be signed or kissed by a messianic figure. Yes, it is election time in the United States of America! A pandemonium which seems to last forever and which you are forbidden to forget about. The global media machine is in full swing; churning out articles, opinion pieces, and the usual analysis from a name or face that cannot quite place. There is, however, something quite different about the current nomination race and the preceding media fare: populism. The term is used haphazardly by all ends of the political spectrum to explain the successes of both Donald Trump and Bernie Sanders.

Donald Trump and Bernie Sanders are by no means the stereotypical candidates that the Republican and Democratic ‘parties’ churn out. They are not the well-polished, finessed characters that we have become so well accustomed to as the consumers of democracy. At a stretch, some have described their campaigns, rhetoric, and policies are almost anti-political. Yet their successes are explained in strictly political terms: that ambiguous, vague, and illusive political phenomena of ‘populism’. Populism has consistently appeared throughout the history of political theory with Plato equating it with a “dangerous excess” in The Republic. Despite such a prevalent and prolific presence in the history of political ideas, the term still remains as elusive as ever. It is used to describe diverse and divergent political realities that may, or may not, be related at all. It has become somewhat of a buzzword amongst political commentators and news outlets as an explanation for political phenomena and unlikely outcomes:

“Why is Trump so popular?” “Because of populism, stupid!”.

In order to approach populism we need the help of a wonderful Argentinian theorist who goes by the name of Ernesto Laclau. In 2005, Laclau took it upon himself to provide a beautifully consistent and cogent theoretical approach to the study, and thus the understanding, of populism. ‘On Populist Reason’ was born out of a deep dissatisfaction with the existing literature on populism as the “sociological perspectives either considered the group as the basic unit of social analysis, or tried to transcend that unit by locating it within wider functionalist or structuralist paradigms.” For Laclau, defining populism was not the most pressing matter within the discourse, as he believed that populism does not have a referential unity because it is not ascribed to a palpable phenomenon, but to a social logic “whose effects cut across many phenomena.” To put it in plain language – something Laclau does reluctantly – populism is a way of constructing the political. The straight forward question “what is populism?” should be replaced with the questions such as “to what social and ideological reality does populism apply?” and “of what social reality or situation is populism the expression?”. Questions such as these ask about the social contents which populism expresses, “while we are left in the dark as to why that form of expression is necessary.”

Laclau’s approach to populism is not to solve the ambiguity of the concept, but to embrace the vagueness of populist discourse as a consequence of social reality itself being – in some situations – vague and undetermined. Populism is not just a clumsy political and ideological operation, it is a performative act endowed with its own internal logic. The rise of Donald Trump and Bernie Sanders   and the institutional disruption they have caused should not be understood as only a reflection of political uncertainty or temporary frustrations. All the uncertainty we see in American politics is what Laclau would describe as “the arrival at a fully political era”. Populism is the “very essence of the political” and “the construction of a ‘people'” as “the political operation par excellence”.

Some of you may be reading his and thinking: “How can both Bernie Sanders and Donald Trump be populist when they inhabit different ends of the political spectrum and probably agree on nothing?”. Sanders and Trump can both be labelled populist in the same way that Mao and Thatcher were in their respective periods. Populism is not about the ideological content of a political campaign or policy, it is about the form of this political expression. The distinctiveness of populism is that it gathers together disparate ideological positions or political demands, and stresses their equivalence in terms of a shared antagonism to a given instance of political power or authority. In the cases of Sanders and Trump, this is the incumbent elite that threatens Americans well being.

For Sanders, the definition of the elite is the 1% who control the majority of capital at the expense of the 99%. The solution to this problem, in albeit simplified terms, is to reel in the banks, bringing them under the control of democracy and the rule of law, and to invest in infrastructure and social welfare in order to decrease the ever-increasing inequity in America. Sanders wants to introduce free health care and free education for the masses and uses the model of the Scandinavian welfare state as something the United States should strive for. It is almost mind boggling to thing that a man who labels himself as a democratic socialist can even have got this far. The term socialism has never been able to shake off the negative Cold War connotations that it has within the American lexicon. However, this all makes sense when you see that the majority of Sanders support is coming from young people who were born after the wall came down. Research conducted in 2011 shows a dramatic shift amongst American youth with 49% of 18 – 29 year olds viewing socialism in favourable light, compared to 43% who viewed it unfavourably. The same poll showed that 46% viewed capitalism favourably, whilst 47% viewed in unfavourably. Could it be possible for Sanders to construct a ‘people’ on the basis of disenfranchised youths who struggle to see any justice in global capitalism? Is this a legitimate electoral base for presidential success?

Although Sanders managed to win four of the eleven states during Super Tuesday, the viability of his campaign is open to question. There is no doubt that Sanders has galvanised young people all over America by telling them that it does not have to be like this. The rhetoric of a populist is certainly present as he constantly reinforces the dichotomy of the 99% and the 1%. Yet, this dichotomy hasn’t created a ‘people’ that can form a legitimate electoral base for Sanders. This, I believe, will be the reason Sander’s campaign fails to keep up with Clinton and all her superdelegates.

Trump’s approach to the problem of the Establishment “who is trying to buy Washington” is not to bring about a return to popular sovereignty, but to create a new elite. As Trump so often reminds us he knows all the geniuses on Wall Street and further afield, and he can construct a cabinet out of these people. A counter-elite of sorts that he will manage and oversee in order to, as his catch phrase reminds us, make America great again. The ‘Make America Great Again’ tagline that I wear with pride on my baseball hat has a certain linguistic function which Laclau highlights in his work. It acts as a floating signifier – an empty sign that loses its own specificity as it stands in for the other specific demands to which it is seen as equivalent. Despite this lack of meaning it taps into a real fear among many working class and middle class Americans who truly believe they are losing their country in both an economic and cultural sense, and thus attach meaning to it. Trump’s followers unify their disparate demands under the signifier of ‘Make America Great Again’ and constitute a ‘people’ which can provide Trump with the momentum to win the nomination. A scary prospect indeed.

Laclau’s work offers as a rich range of theoretical tools to help us understand our political realities, and especially the phenomena of populism. Through his theoretical basis, we can approach populism in a more productive and less prejudice way. Whether Trump and Sanders can truly be considered as populist relies on their ability to construct a palpable ‘people’, and it is too early to say definitively. Nonetheless, the populist characteristics that are present in this election suggest a reinvigoration of American politics and a challenge to the established democratic institutions.

Whilst we continue to be the hopeful bystanders of the American elections, it would benefit us all to remember the teachings of Ernesto Laclau.