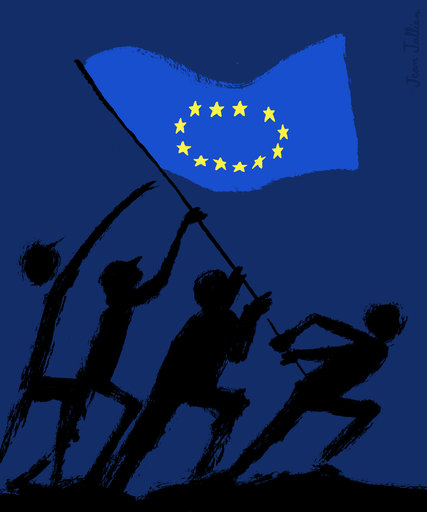 With a series of essential national elections that will, without any doubt,  determine the path to follow for European integration in the near future, 2017 is shaping up to be a decisive year for the Union. The rise of EU-sceptic, populist parties all across the continent seems to approach its tipping point in the coming months. In a worst case scenario it seems that the EU’s foundation, trembling for a long time due to dissatisfaction and inefficiency, might collapse all together. The centre stage will, without any doubt, be the French elections in April this year. But also the outcome of the German and Dutch elections later on this year will further define Europe’s future. Adding to this is a declining ally in the West in the form of freshly elected US president Donald Trump and the ever-existing threat in the East of an ever more unpredictable Vladimir Putin. While such forecasts shed light on a dark year approaching the EU, 2017 might very well be a year of opportunities. Competitive, qualitative elections and shifting international dynamics might provide the European Union with the start of a shining future for the European continent. Therefore, it is high time to make the case for optimism.

In France, the 5th Republic is preparing itself for arguably the most ground shifting but also unpredictable electoral race in its very existence. In the period foregoing the start of the electoral campaign, the strife for the French presidency seemed to take place in the camp of the right where the pre-election of the Républicains was expected to provide the future French president. It was ultimately conservative catholic candidate Francois Fillon who, against all odds, claimed the republican nomination, leaving behind him a humiliated Nicolas Sarkozy. A few months later, with the upbringing of a scandal of the past, Fillon’s lead in the polls is steadily declining and once again the presidential race seems to be set upside down. Benefiting from this is Marine le Pen of the extreme right Front National party,  actively trying to stitch away the desperate Fillon electorate. The French thus seemed to had gotten on an even more isolationist, ‘France first’ path then they would already be under Fillon.

However, another upset came with the unexpected candidature of independent centre candidate and ex minister of finance, Emmanuel Macron. In times where Fillon and le Pen’s arguments sometimes seemed hard to distinguish, Macron provided the French with a completely different voice.  Macron proves to be the embodiment of a modern French politician. Supporting the course of European integration, seeking further realignment to Germany and speaking English at international conventions are only a few of the numerous examples of what make Macron no ordinary French politician. While one might wonder how long the ‘Macron mania’ may last, especially in a presidential race as unpredictable as this year’s French elections, Macron thus far has succeeded in convincing both voters on the right and the left of the political spectrum in joining his political ‘En Marche’ movement.  Second behind le Pen in the polls, it is predicted that Macron would beat le Pen with 60 to 30 percent of the votes in the second round. Such an outcome would not only necessarily provide French politics with a welcome breath of fresh air, but it would also benefit the Union as a whole. For a long time, the French led by charismatic leaders such as Charles de Gaulle seemed to slow the process of European integration down, but with the prospect of a Macron presidency and through strengthening ties between France and Germany, the beating heart of the Union might seem to be saved from a critical heart attack just at the right moment.

However, the likelihood of such developments taking place will largely depend on future developments in Germany.  With France’s faith remaining relatively uncertain, the German elections seemed for a long time to be vested in certainty. With no real contender, Angela Merkel seemed to be set for yet another term as German chancellor. However, with the unexpected announcement of ex-president of the EP, Martin Schulz, as candidate for the German socialist party, Merkel’s CSU party is facing a strong opponent for the presidency. Once again carried by the same hype as Macron’s campaign, ‘Gottkanzler’ Schulz’ popularity has yet to reach its tipping point. However, such a tight race might very well provide to be beneficial to the faith of the European project. With Merkel losing some ground in the elections, the race might get tighter and tighter in the coming months, leading the parties to critically redefine their respective party programmes. A clear and close race between Merkel and Schultz might take away the limelight of protest parties such as the Alternative für Deutschland party. It would not only, for the very first time in years, give the German electorate a real choice but moreover would shift the nature of the public debate from an endless conflict between the established parties against protest parties to a real good-old political competition between two distinct parties.

Whatever the outcome of the German elections, little doubts exist on the likelihood of prolongation of Germany’s  role as leader of the European project.  The choice seems no longer to be between less or more Europe through a competition between the established CSU/CDU axis and protest parties such as the AfD, but rather between even further European integration or commitment to a multi-speed Europe.

Outside of the union, international developments also seem to be of vital importance for the European faith in 2017. Further uncertainty on future American commitment to the security of the European cause through mixed signals towards NATO involvement and further strengthening of a possible Trump-Putin axis have led the Union to find itself on a turning point – not only in terms of internal security but also in the field of foreign policy. For a long time, member states have been reluctant to accord further competences  to the EU in the field of foreign security. However, with recent Russian violence in Ukraine fuelled by the Russian desire to test the limits of Trump’s laissez-faire stance, ab ever-existing threat shading over the Baltic states and increasing dissatisfaction with Trump’s black/white positioning towards the Middle East, Brussels might finally be provided with the final push that is needed for an expansion of its competences in the field of security through the establishment of a common defence force in the form of a European army or at the very least a common foreign security approach.

Already for far too often, 2017 has been described as being  predestined to profile itself as the year in which the crisis of the Union will reach its tipping point. What is forgotten however, is that even though it might very well be true that the political climate of the EU and its respective member states  has never been as polarized as it is now, the result could fall either way. Much will depend on not only the outcome of the upcoming national elections but more importantly on how, once in office, the future leaders of Europe will tackle the issues that the Union is facing. With little doubt residing around Germany’s role in the union, a fresh pro-European face in French politics  and an old EU-US axis that is steadily falling apart, opportunities seem to exist. Led by a group of people with a common European vision and a progressive stance the EU might seem to be heading into a future in which it has the tools to once again redefine itself and its citizenry again in times of increasing global instability and uncertainty. All that is needed for now is a little sparkle of optimism for 2017 to be what it could be.