Humanitarian Intervention or Protection of the Interests of Global Powers? 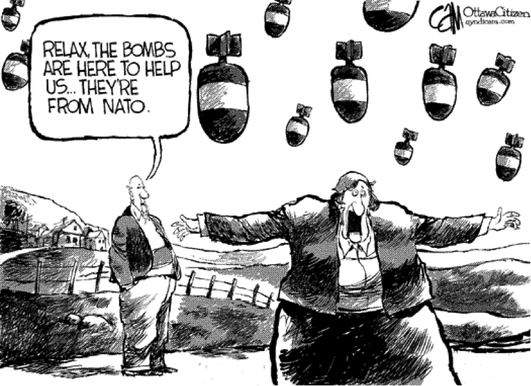 The United Nations (UN) has evolved its policy towards humanitarian intervention over years and initiated the cancellation of state sovereignty trying to maintain human rights because the intrastate conflicts such as radical Islamic or major economic crises which led to starvation or civil wars rose.  On that point, Noam Chomsky argues that the alteration of the policy of United Nations regarding to humanitarian intervention and sovereignty reflects the  interests of global powers such as the petroleum companies’ interests in Libya. As Chomsky mentions in his speech, stockholders in petroleum were surprisingly quickly  relayed information after the NATO’s involvement to Libya in 2011.

According to Charter of the United Nations, the member states of UN should respect and comply the Charter of the United Nations. The superiority of the United Nations can be questionable, with the specific examples on this matter. In 2011, while NATO forces intervened Libya with great enthusiasm why could the international community not agree on sanctions and humanitarian intervention towards the Syrian case? In this respect, former President of Libya Muammar Gaddafi mentioned that actions of the international community violated the sovereignty of Libya and declared that “Libya belongs to Libyan people”. As a result of these actions, the questionability of the supremacy of the United Nations rose because no negotiations were held by international community with respect to the invasion of Libya on humanitarian grounds. Therefore, humanitarian intervention in Libya cannot be just since it is a sovereign state and a legal government continued its function until the civilian casualties began to increase in Libya. Moreover, while the actual civilian casualties were unknown, they were nonetheless declared by the United States. Therefore, such information regarding the intervention becomes problematic since the humanitarian intervention occurred for the prosperity of civilians and democratization of Libya.

The Syrian case is the one of the most significant matters that exemplifies the dilemmas in humanitarian intervention. The Syrian Civil War is an ongoing armed conflict which started within the Arab Spring. Interestingly, both the government forces and anti-government armed groups have used illegal weapons and human rights abuses, limitations of basic freedoms, torture, and unlawful killings. Furthermore, reports of some Non-Governmental Organizations (NGOs) do not reflect the accurate information and some reports were refuted by Syrian government. Furthermore, since the conflict is continuing with many parties involved, the possibility for humanitarian intervention is becoming more complex for international community.

The Syrian government demolished its chemical weapons in Norway with the testimony of the Russian Federation and the United States of America. However, opposition groups is accused by United Nations because of the usage of chemical weapons. The United Nations’ diplomatic movements have failed since approximately more than 400,000 people died, 34,500 people are captured or missing, over 7,600,000 people are displaced internally and 4,000,000 people have become refugees because of the intensive conflict. Because of the past actions of the United States, the Russian Federation and the People’s Republic of China do not look closer to a humanitarian intervention. In contrast, the United States accused Russia and China because of their support for the Syrian regime and claims that the Syrian government is illegitimate. Furthermore, international recognition of the Syrian National Council by some countries including some global powers creates a problematic issue. On the other side, humanitarian aid is continuously sent by United Nations but the sum of aid become a record with a dramatic spend of $6.5 billion USD.