…Living Through the Shock of Contrast and Difference: An Interview 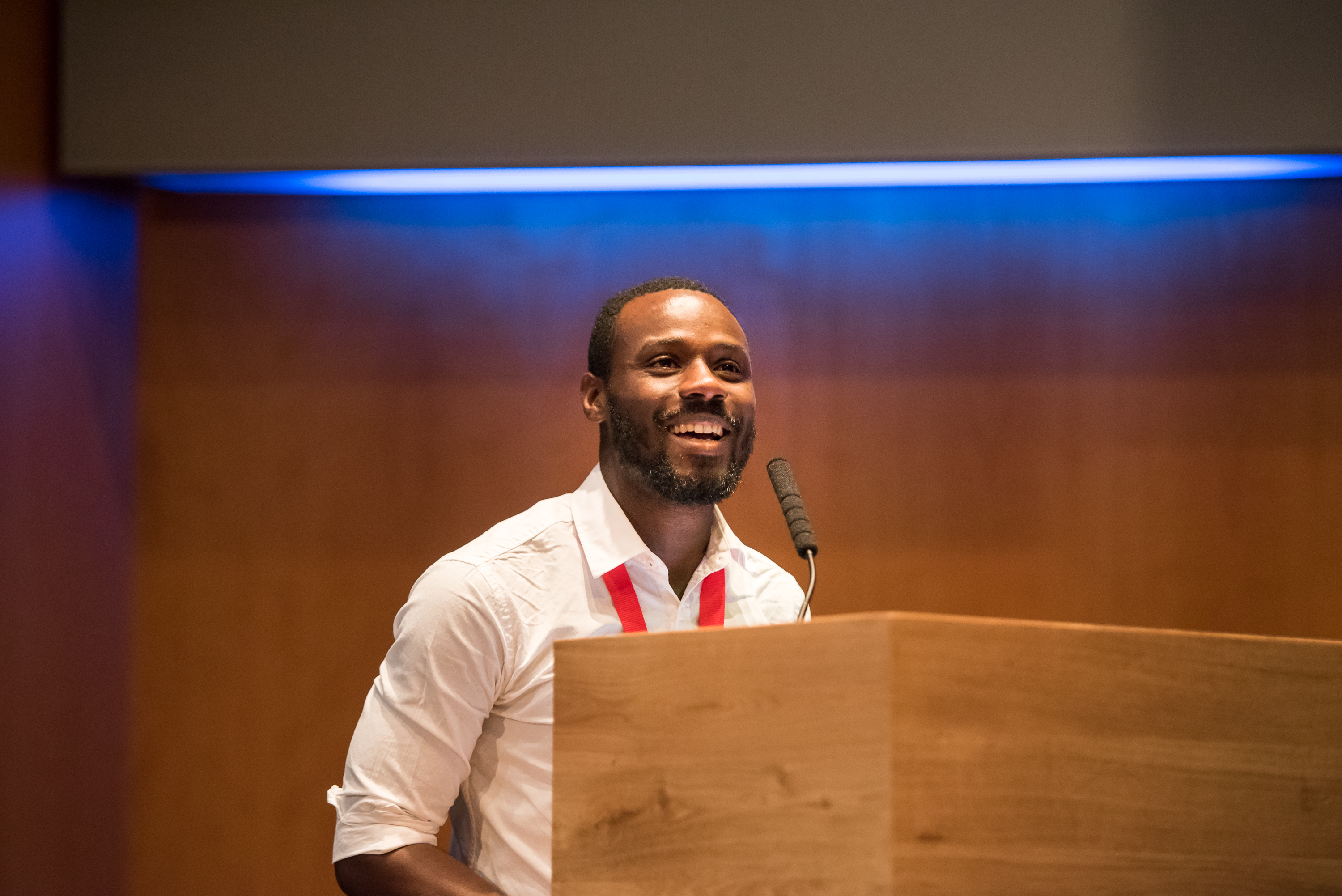 Mustapha Abdu-Aguye comes from Zaria, Nigeria. He moved to Groningen, the Netherlands, 5 years ago to do a Master’s degree in Nanoscience. Currently, he’s half way though his PhD in Photophysics and Optoelectronics. Mustapha agreed to talk with Checks&Balances about the cultural differences between the Dutch and Nigerians, as well as discuss his personal growth.

‘I attained both my Bachelor and Master degrees in Nigeria. I continued to pursue a PhD, yet, quit after 6 months, as I didn’t find the study engaging. A close friend of mine, who had already moved to Groningen, learned about my decision and persuaded me to come join him in the Netherlands. I was reluctant at first, didn’t want to start yet another Master. Yet, after I was invited for an interview and got to visit the city, I fell in love with Groningen, saw myself living here. Now both my friend and me are pursuing our PhDs in the same department’.

‘I come from a huge family – I have 4 brothers and 4 sisters. We grew up nearby a university campus, where my mother worked as a nurse at a teaching hospital and my father still works as a professor of medicine. I never wished, however, to follow my parents’ footsteps. I preferred math, physics and chemistry to geography and economics, so when admitted to senior secondary school I was allocated to the scientific track. One thing needs to be made clear here. As a society, Nigeria is very power-conscious. Power can be acquired by being rich and such thinking is deeply embedded in the Nigerian psyche. If you want to be rich, you need to have a good job and if you want a good job, you need to be either a doctor, an engineer, or a lawyer, or an accountant. However, I chose to specialize in physics as I wasn’t sure of what I really wanted to do’.

‘Moving to the Netherlands allowed me to learn more about my country and myself. When compared to the egalitarian Dutch culture, Nigerian society is organized in a very different way. There’s generally a more a salient power structure. If, for example, you need to make a decision in a group, it is normal to defer to the oldest person present. In fact, patterns of superior as well as subordinate relations are reflected by some of the spoken languages. For instance, in the Nigerian language I speak, there are different words for referring to your older and younger brothers. They both mean ‘brother’, yet, they specify whether he is older or younger than you are. To be honest, I think the only other cultures that resemble Nigerian perception of power are Asian. If a person is your senior, outright disagreement is considered quite rude. It’s not just about the status – your title becomes your name. Often when a person in Nigeria acquires a PhD, his name is no longer Chris or Mustapha, it becomes ‘doctor’ or ‘doctor Chris/Mustapha’. From that point on, everyone calls him like that’.

In Nigeria, we don’t say ‘no’ too quickly. When someone offers you something, you hesitate before you refuse it. A direct negative response is considered to be quite rude.

‘Such forms the core of the Nigerian culture. If you, for instance, see your professor passing through, you’d feel obliged to stand up and offer to carry his bag and if he allows you to do so, it would be totally normal. If this illustrates one extreme of the spectrum I feel like in the Netherlands you can find the other extreme. It took me ages to get used to calling my Dutch and international professors by their first names. I still refer to them as professors when writing emails, though, after 5 years spent in the Netherlands I now pick up the cultural cues unconsciously. Once at home, I switch right back and speak with friends and family formally.

‘Another thing I had to get used to was the Dutch directness. In Nigeria, we don’t say ‘no’ too quickly. When someone offers you something, you hesitate before you refuse it. A direct negative response is considered to be quite rude. For example, if someone offers you food, and you aren’t keen on eating it – you’d reply with something along the lines of ‘That’s very kind of you! Put an extra spoon on your plate, I’ll taste it’. Whereas in the Netherlands, you’d just go ‘No, I’m not hungry, I just had dinner’. Luckily, I have learned to filter it out and understand that it is just a Dutch way of communicating’.

‘With regard to the Dutch education system, one of the biggest differences I noticed is the way semesters are planned. The idea of a ‘block’ is quite alien to me. A typical college semester in Nigeria has three months, making it possible for students to procrastinate during the first two months, catch up with all the work just before the exams, and still acquire decent grades. Over here, a block consists of just 8 weeks. At my home university you could easily spend 8 weeks without even knowing what the course is about, yet, if you mess around here for a week only, you’ll end up paying for it a lot’.

‘Also, I’m not used to the fact that you can retake exams. In Nigeria, if you fail, you fail and you just have try again next year. If, for instance, you don’t pass the first semester prerequisite courses, you’re not allowed to proceed with the later ones. This, quite understandably, means that the entire system can be unforgiving of mistakes once and if they are made. In the Netherlands, though, you have to manage your time better; the system itself is more forgiving. Students here tend to have a more easy-going attitude, knowing that if they fail, they can always study more and retake the exam. No sense of urgency is shared. When I first moved to Groningen I lived in a Dutch student house and I was surprised to meet people who started studying 4-5 years ago, switching their study programs every few semesters; to which I would think ‘you must really love being in the university, if you extend your studies this much!’

Once you move away from home, from preconceived notions of religion, self, and your society, you become able to re-evaluate yourself and remove the subtle chains that might have kept you in a bubble.

‘In Nigeria, you perform well as a student if you know exactly what the professor wants from you, without questioning the course material too much. The studies themselves are answer-driven, focused on finding straightforward solutions to every problem. Over here it’s the opposite. The more I study here, the more I realize that most of the time the answer is ‘maybe’. The professors here are less interested in the ‘yes’ or ‘no’, rather, they challenge you to think critically by always asking the why question. Studying here, therefore, feels more rewarding. I had almost perfect grades back in Nigeria, yet, I didn’t feel like I truly deserved them. And when I finished my Nanoscience Master I really felt like I had learnt so much and, hence, grew to appreciate the acquired grades and all the completed courses’.

‘Traveling and living abroad forces you to confront your own identity. Before moving to Groningen, I never thought of myself as particularly Nigerian. When I moved here it was the first time that I ‘actually’ realized that I’m black. Yet, once this occurred to me I began wondering what it means to be black in the first place? Just because I happen to have different skin pigmentation, am I fundamentally different from other students? Such questions make you re-evaluate your own identity, which is not something you ‘get done with’, it’s something you continuously do. The idea of self, how I relate to others, what my perceptions are of things like gender and sexuality – these are things you get to discuss here. Once you move away from home, from preconceived notions of religion, self, and your society, you become able to re-evaluate yourself and remove the subtle chains that might have kept you in a bubble. In fact, you begin building new ideas with tools which you chose yourself’.