Bhang: Flying High Above the Law? 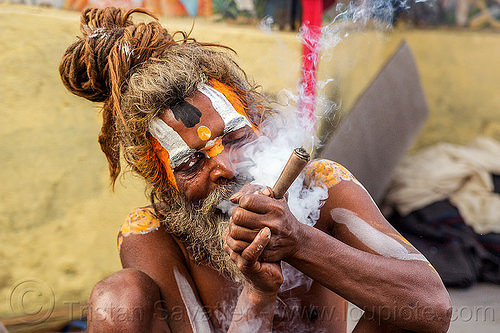 “The cannabis drugs commonly used in India are derived from the flowers, leaves (and the resinous matter derived therefrom), fruit, young twigs and bark of the stem of the plant Cannabis sativa Linn. of the family Cannabinaceae.” – United Nations Office on Drugs and Crime

Medical cannabis, called ‘bhang’ in Indian, has never been outlawed in India. As such, it is one of the view countries where one can legally use cannabis in public without being arrested. In fact, the use of cannabis is so common and integrated in the Indian society, that the authorities are unable to criminalize it. This is strengthened by the fact that bhang is originated in India. The earliest references to bhang have been found in the so called ‘Atharva Veda’, one of the four sacred texts of Hinduism, deterring back to approximately 2000 to 1400 B.C. According to the Atharva Veda, cannabis is one of the five most sacred plants on Earth, as its leaves were inhabited by a guardian angel. In the sacred texts, it is referred to as ‘a source of happiness’, ‘a joy-giver’ and ‘a liberator’. In addition, bhang was seen as a means to help humans lose fear or release them from anxiety.

More importantly, the plant is associated with the Hindu god of destruction, called Shiva. According to the legend, Shiva once had an argument with his parents, where after he wandered off into the fields. Exhausted from the family quarrel and the hot sun, he fell asleep under a cannabis plant. When he woke up, his curiosity led him to consume some of the cannabis. He felt instantly rejuvenated and refreshed, prompting him to make the plant his favorite indulgence. Whereupon Shiva became known as ‘the Lord of Bhang.’ However, another legend describes a different version of the story. Long ago, the Hindu gods and demons tried to churn the ocean, in order to obtain the 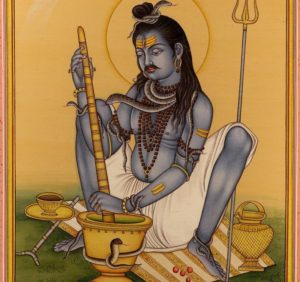 nectar ‘Amrita’, the drink of immortality. A byproduct of this churning was the release of the poison ‘Halahala’, which could kill both the gods and demons. Shiva drank the poison to protect the others, turning his throat blue and causing great misery. The god Parvati responded by offering him bhang to cool down.

In the 6th century B.C. bhang obtained its medicinal value as a means to enhance the digestion. Besides, it served as a cure for diseases of the nervous system. Moreover, bhang gained importance in the military field. During the Middle Ages, the Indian soldiers took a drink of bhang before entering a battle, to boost their strength and agility. However, probably the most important function of bhang was to relax and find pleasure. It was consumed as a drink, eaten in small balls or smoked in a pipe, known as a chillum.

When the British established rule over India in the mid-1800s, it was expected that the western country would ban the production and consumption of bhang. However, the British were so overwhelmed by the widespread use of the plant, that they did not know how to deal with it. A British report by J. M. Campbell in 1893 suggested: “To forbid or even seriously to restrict the use of so holy and gracious a herb as the hemp would cause widespread suffering and annoyance and to the large bands of worshiped ascetics deep-seated anger. It would rob people of solace in discomfort, of a cure in sickness, of a guardian whose gracious protection saves them from attacks of evil influences.” Consequently, bhang was not outlawed during the colonial period of British rule over India. Instead, the British government set up a study to research the effects of the ‘drug’ and its cultural significance. This resulted in the establishment of the Indian Hemp Drugs Commission in 1894, which legally framed bhang as a medicine.

Everything changed in the 20th century. The United States adopted the most punitive and repressive legislation against drugs, ever passed by Congress: The Narcotics Control Act of 1956. As the United States was and still is a powerful nation, the anti-drug policies spread easily around the world, a phenomenon known as ‘the American Disease’. As a result, most of the countries worldwide adopted an anti-drugs policy, including the ban on cannabis. India did not remain unscathed from this development. In 1985, India adopted  the Narcotic Drugs and Psychotropic Substances Act’, prohibiting the production, sale and consumption of most parts of the cannabis plant. However, the leaves, consisting of the so called bhang, are an exception. They can still be legally sold in government-approved bhang shops.

In fact, the use of bhang is still an integrated part of the current medical system. Besides, bhang plays an important role in Hindu celebrations, like Shivrati (Night of Shiva) and Holi (the Festival of Colour). During these festivities, bhang is used to strengthen the sense of happiness. However, the plant is also used as a consumption good in everyday life. Besides, bhang is very popular in the Indian Brahmin community, where the consumption of alcohol is not allowed. Furthermore, in some religious parts of India, the holy men, called ‘babas’ and ‘sadhus’, drink bhang or smoke it from a pipe. In short, bhang or cannabis is still commonly used in India today; the myth of Shiva, God of Bhang, continues.