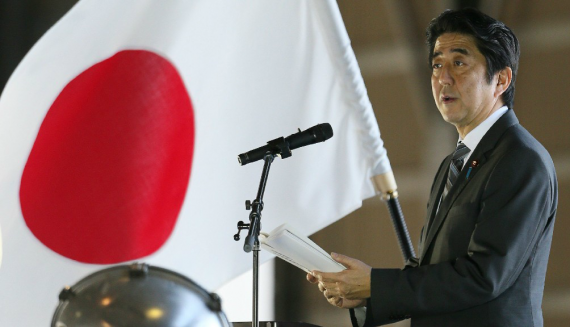 Back in the beginning of 2017, the popularity of prime minister Shinzo Abe and his Liberal Democratic Party (LDP) was at an all-time low. Many Japanese had grown tired of the economic recession and government stagnation. Abe’s unpopularity with the public culminated even more when his name was mentioned in a series of corruption cases. His disgrace led to the emergence of Yuriko Koike, the populist-conservative governor of Tokyo, who fiercely challenged Abe’s position. Despite Koike’s rapid rise in Japan, Abe was not beaten yet: he found an opportunity in the threat of North Korea. Reacting to the North Korean missiles flying over Japanese airspace, he stated on television that the government ‘was prepared to take all the measures to protect people’s lives.’ Abe’s fierce reaction to Kim Jong-Un’s aggression led to a comeback in his popularity. Aware that this popularity would not last for long and hoping he could prevent a well-established popularity of Koike, he wanted to move the general elections scheduled for next year to October. Koike, aware of Abe’s goals, acted rapidly: on September 25 she established her own party, the Party of Hope (PH). Abe responded hours after by dissolving the House of Representatives, and the general elections were moved to October 22. This gamble could provide the LDP with either a landslide victory or total defeat, as the PH’s popularity was still rising. Abe had crossed the Rubicon, and there was no turning back.

Abe’s unconventional move led to an unprecedented chaos within the lines of the opposition: the PH, despite its booming popularity, did not have the time to establish a good-functioning campaign apparatus because the elections had moved forward. Meanwhile Japan’s centre-left party, the Democratic Party (DP), was disbanded by its leader, who urged his party members to form a united front against the LDP by joining the PH. However, the progressive members of the former DP were not permitted into the PH, because of the conservative party guidelines of the PH. This led to the emergence of another new party, this time on the left: the Constitutional Democratic Party (CDP), led by former DP member Yukio Edano and constituting progressive former DP members. With election day less than a month away, it was finally clear who would try and challenge the LDP’s establishment, yet time to establish a serious threat to Abe’s power was short for the populist Koike and the progressive Edano.

Ever since Abe had called for a ‘snap election’, Japanese newspapers’ headlines were dominated by political spectacles, such as the unexpected collapse of the centre-left, rather than by actual party policy clarification. Nevertheless, these elections had the potential to set in motion an important change in Japan’s political environment. The expansion of Japan’s small military was one of the key issues of the elections. The LDP, as well as the PH, both urged to change article 9 of the Japanese constitution, which restricts the size of the Japanese military. This article, established by the Americans in the aftermath of the Second World War, had to be changed in order to ensure Japan’s national security with regards to both developments on the Korean Peninsula as well as Japan’s border disputes with China over the Senkaku Islands. The progressive CDP, on the other hand, pledged to stay on the pacifist route, investing in economic reforms and healthcare instead of military expansion. An outcome in favour of the conservatives would prove Japan had finally unburdened itself of its wartime trauma and was ready to once again rise as a military power, while a progressive victory would mean Japan would remain an economic power, not concerning itself with military conflicts. In short, these elections would be about Japan’s identity on the global stage.

The important subject of remilitarisation was once again overshadowed, when Koike received fierce criticism for averting progressive politicians from the former DP. Japanese who wanted to see a real change from the conservative, right-wing prime minister Abe, were disappointed in Koike. This resulted in a downfall in the polls as swift and sudden as her emergence back in September. Meanwhile Edano was praised by the public, and many disappointed former PH supporters thought Edano to be the only progressive able to challenge Abe. The downfall of Koike led many conservatives into supporting the LDP, despite its stagnant policy. This was the situation when Japan finally went voting last Sunday, after an unexpected, unusual and unclear election running-up. In the weeks running up to the elections the opposition had been unable to challenge the LDP: the PH had been unable to consolidate its popularity and the centre-left totally collapsed, only partially revived by Edano. Thus, October 22 one-third of the electorate voted for the LDP, leading to 284 out of the 465 seats of the House of Representatives. The second-biggest party in the lower house is the CDP, which unexpectedly received a relatively high number of 55 seats, followed by the PH, which got a mere fifty seats. Both parties do not even come close to the landslide victory of the LDP. Together with the Buddhist Komeito Party, the LDP has a two-third majority, which is necessary for a constitutional change. Furthermore, Japan can expect four years of continuity from the LDP-Komeito coalition. Abe’s gamble had paid off: if all goes to plan, his dream of a secure Japan will soon become realization. Japan has voted, and it has voted for a strong military once again. With the constitutional change, Japan’s re-emergence as a military power can very well force its neighbours to expand their military in their turn. Because Japan’s relations with especially China are uncertain at best, this development is surely a worrying one, for little is needed to turn Asia’s fragile peace into something much worse.