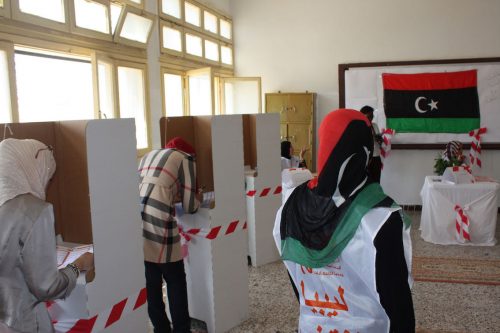 For decades, Libya’s politics only had one face: that of Muammar al-Gaddafi, a military colonel, who had seized power in the late 60s and had since then clung onto that power like flies to a honey jar. He was a dictator to his peoplebut a necessary ally for many countries, also in the West. They were motivated mostly by his political ambition and his closeness to Libya’s oil fields. He kept also managed to keep the region stable and work closely with surrounding governments.
This changed when the Arab Spring swept over from the Tunisian uprising to Libya. After unsuccessful attempts by the regime to violently break the protesters up, the UN Security Council allowed a military intervention led by the NATO. Soon, it became clear that the intervention led to an advantage for the rebels and they managed to take over Tripolis. Eventually, the civil war came to an end, leaving Gaddafi and two of his sons dead, his family being imprisoned or fleeing the country.

What was left of Libya was a fractured system of parties, an insufficient legitimacy of the government and a divided country in which fundamentalists, reformers and criminals tried to get the power.
Directly after the war in 2011, two different parliaments were formed, who did not acknowledge each other and were fighting for influence. The elections held in 2014 did not resolve any of the major problems. Instead, the fights over power and oil fields led to a stand-off between alliances in Tripolis. Later, different militia also tried to seize the biggest oil fields, but failed to do so in the end.
The two parliaments that emerged at the beginning are slowly dissoluting since the 2014 elections. The capital is governed by a Unity Government since then, but even here they lack power and influence. The East is ruled by general Chalifa Haftar. He is rumored to be in a bad health condition, however and fears are rising that there will be another bout of chaos and violence in case that he dies. Most militia are only loosely affiliated with either side, not controlled by any kind of authority.

Libya has become a place without law enforcement and blank, unmonitored spots on the map. It soon led to the emergence of different political groups and violent militia. Additionally, smuggler rings started to establish human trafficking, not to mention the thousands of lives that are lost on the Mediterranean Sea because they try to smuggle people to Europe in broken boats, Libya unable to do anything than sit by helplessly and watch these events unfold.

For Europe, this poses a major difficulty. The refugee routes cutting through Libya are not only a humanitarian crisis in the region but brought political disunity to the European Union as well. It is in Europe’s interest, that the region becomes stable once more. That would decrease the amount of refugees passing through. A stable Libya would make the situation in the Mediterranean easier to handle for the EU. There are also hopes that a peaceful Libya can bring stability to the whole region.

Now new talks about elections have been introduced again. The EU is closely observing the talks, as they as well are hoping for quick and effective results that might stop the situation in Libya from getting out of control.
The results of the last elections are still in the minds of the people. The different parties did not bring peace and the fear is going around that a new dictator will try to establish himself. It would be another heavy blow to the battered country if it would follow in the footsteps of Egypt. There the revolution managed to bring a short-term difference, just to have a violent government being established again, ending with the single rule of President al-Sisi who is now governing the same way Husni Mubarak was before he was forced to step down in 2011. Al-Sisi seized the power in 2013 after a putsch by the military.

Fear in Libya at first had been that the same would happen. Instead, the country is in the iron clutches of a civil war since 2014. The different forces are trying to seize control over cities but also over the oil fields and other strategically important places that might influence the outcome of the war. The Unity Government in the capital and the parliament based in the east of the country are fighting for power. After peace-talks between them and the UN failed, they are now using elections as a new measure to gain influence over the country.

The population is taking the announcement of the plans of elections with cynicism at best. Many have lost the hope that the war would be an easily remedied issue. If it would be easy to cure the country with elections, then it should have worked back in 2014 as well but instead of bringing the desired democratic transformation, the elections only served to lead the country into another crisis and ended with it entangled in another civil war.

Nowadays, the population is wary of high-flying hopes.
Instead of elections, a solution for the pressing problems is demanded instead. Enraging the people further is the candidature of Gaddafi’s son Saif al-Islam who was imprisoned after the fall and subsequent death of his father. He announced his planned candidature for the presidency on March 22 after he was freed from prison and granted amnesty by both governments earlier.

Human Rights Watch attested that elections under the current circumstances would not only be dangerous, but no free and fair elections would be possible to be realised.
The political turmoil in Libya is not over yet and with these upcoming elections, it is not yet sure in which direction the country will move.