Wolf in Sheep’s Clothing: How a New Act creates a right to discriminate 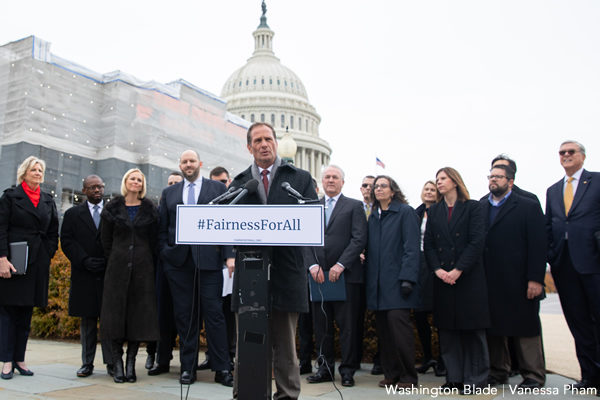 In the United States on December 6th, the Fairness For All Act was introduced in the House of Representatives. The Act is sponsored by the representative of Utah, Chris Stewart. The notable apect of this Act is that is stands for the protection of the LGBT+ community while creating safeguards for religious organizations and individuals, including marriage counsellors, adoption agencies, and schools.

The Fairness for All Act tries to do the impossible: finding common ground between religion and sexuality. In contrast to the previously passed Equality Act, the Fairness For All Act offers legitimate protection to someone with a different sexual orientation. For example, the Act does not allow someone being fired for their sexuality. However, problems with the act are likely to arise in the future, as it consists of many loopholes.

On one hand, the Act will explicitly ban anti-LGBTQ+ discrimination for the first time nationally in public spaces, such as workplaces, housing, and banking. On the other hand, the bill presents new exemptions that religious conservatives may take advantage of such as: allowing businesses with 15 employees or less to discriminate against LGBTQ+ customers. The bill would also allow religious corporations to discriminate against LGBTQ+ workers, let staff openly raise concerns about same-sex marriage among their colleagues, and create a certificate system for private adoption agencies to receive federal tax dollars while turning away LGBTQ parents.

Both communities are displeased with this Act. As the LGBTQ+ community still can be discriminated against and the religious community feels that their freedom of religion is limited.  Representative Chris Stewart responded to the criticism and said to BuzzfeedNews: “We realize there will be some people who are dissatisfied,” adding that “at least we put something on the table that we agree on.”

The question, however, is how much agreement there will be. The measure has approval from the Mormon Church and several moderate evangelical groups. The Church of Jesus Christ of Latter-day Saints said the Act will “preserve religious freedom and protect LGBT individuals from discrimination.” But it lacks endorsements from the massive national groups, such as the Human Rights Campaign and the Heritage Foundation. Both sides wonder if this way of compromising works and if the LGBTQ+ community will not become the victim of this compromise.

Courts are still unresolved over the rights of businesses to refuse custom creative services to LGBTQ people, such as wedding cakes. The exemption for small businesses draws criticism as it is allowing discrimination.
When asked about those complaints, Stewart said, “I don’t know anyone who would say, ‘You can’t come into my store to buy a six-pack of Coke if you’re gay.’ The legislation isn’t intended to do that.” However, the Fairness for All Act could potentially allow this.

As for adoption, the bill would ban federally funded agencies from turning away parents for being LGBTQ+ couples. However, at the same time, it would create an “indirect funding program”. Parents can use a private religious agency that does not discriminate against same-sex couples. This agency then could obtain a certificate worth thousands of dollars that the private agency could then trade for federal money.
Currently, the Fairness for All Act is still being negotiated. there is still too much discussion about whether or not is fair to the LGBT+ community and the religious community to pass such an act. Although the Act may produce beneficial results for both communities, it cannot be ignored that the act could indirectly legitimize discrimination against the LGBT community.