Spraying down protests: the dangers of the use of teargas 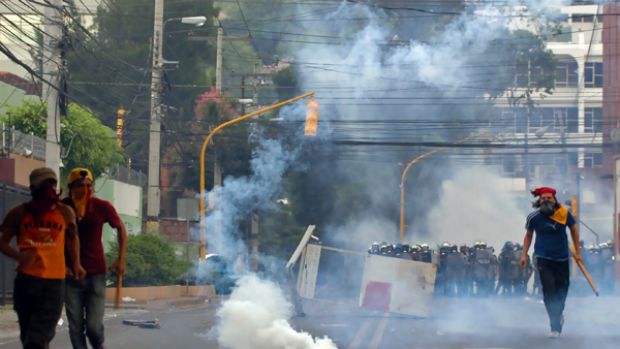 Already in lockdown, the additional measure of a curfew was the worst nightmare for many. When it was eventually established, it was no surprise that riots sprouted. Several methods were used to stop the people from rioting. One of these methods was the controversial use of teargas. Teargas was first used during the First World War on the battlefield and in the trenches. Nowadays, it is only allowed to be used in law enforcement and to stop riots or other types of protests. The gas causes the skin to burn, the victim to choke and the eyes to tear until one is temporarily blind. The goal is not only to cause people physical harm, but also to create confusion and panic. An interesting paradox is the fact that under the Geneva Protocol, it is prohibited to use teargas in wartime, whilst it is allowed to use the gas with the purpose of law enforcement, even though there is often no sign of violence from the people who get the gas sprayed into their faces.

Teargas has been misused a large number of times in various countries, such as France, India, Hongkong and Serbia. The misuse of teargas can lead to bad injuries and even death. Generally, five ways of the misuse of teargas are indicated. These include the use of teargas against peaceful demonstrations, in enclosed spaces, in excessive quantities, against vulnerable populations and directly aimed at one person. An important, recent example of the misuse of teargas is with the Black Lives Matter Movement in the USA. Even though the police claimed the use was justified, experts claimed it was not. There was often no sign of violence from the protestors and the gas was used in situations where there was no way to flee. These misuses are seen as inhumane treatment by the European Court of Human Rights. Besides, teargas doesn’t make a distinction between those who are healthy and can handle the gas and those who will react poorly to the gas, which makes the use of it very dangerous.

In addition to this, the contents of teargas differ and it is often not completely clear what the exact contents are. For instance, the Hong Kong police admitted that during the protests in 2019 and 2020 expired tear gas had been used. There are no international agreements on the trade and production of teargas, which makes the distribution of teargas very unregulated and thus dangerous. There is no clarity on what a certain type of teargas exactly contains and thus how toxic it is. Subsequently, this impacts the clarity on the safety of the use of teargas.

However, no matter what kind of teargas, it is already cleat that aiming right at people can cause serious injuries. Experts warn that the gas should especially not be used in the middle of a global pandemic, since it can increase people’s susceptibility to viruses. The employment of teargas at the wrong place and time thus constitute a serious problem, however, one could pinpoint poor regulations and lack of legislative consistency within this realm as the main contributors to the issue

The use of teargas has seriously challenged certain human rights and environmental regulations under international and European law. The use of teargas does not take into account the right to protest, since it is increasingly used to crush peaceful protests. All forms of the use of force must abide by the principles of necessity and proportionality under international law, but these are generally not taken into account when tear gas is used to disrupt riots. Recently, there has been more attention regarding the increasing (mis)use of teargas with increasing groups of people calling for a ban of teargas. It is to hope clear regulations will be implied and the use of teargas will be limited, so the right to protest is safeguarded.