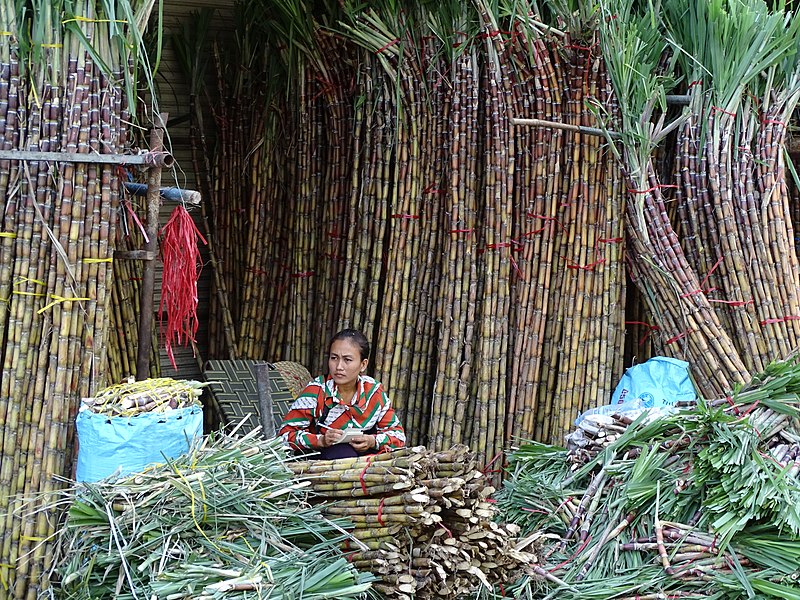 In our modern Western world, sugar is seen as something that is hidden in comfort foods that will make us fat if we overindulge. We think we are safe from it outside of candy stores and fast food establishments. Still, great amounts of sugar is to be found in a lot of processed foods. We try to avoid it because we are told it is unhealthy. In our newspapers and journals sugar is often written off as “public health enemy number one”. Those kind of articles make us more and more conscious of the “dangers” of sugar. For us it would be absurd if spoons full of sugar would be added to our orders in restaurants. However, not the whole world shares our fear of sugar.

When I visited Phnom Penh, Cambodia last summer, I was surprised to see that people added sugar to literally any dish. Next to playing a big part in the cuisine, sugar in the form of sweets was also not shied away from. While volunteering at a primary school in the slums I found out that  all that the children ate was the most extensive variation of candy and cookies with a bottle of fizzy drink on the side. And no grown-up stepped in to limit the amount of sweets. This almost made my sugar-anxious heart skip a beat. I thought of home, where most parents force their children to eat their veggies, and where sweets are seen as a treat. How different it was to see the Khmer children eat an entire meal of sugar. The Khmer I spoke to in Cambodia told me sugar is regarded a luxury that everyone desires. Sugar consumption is connected to economic well-being and prosperity.

www.indexmundi.com, a free public data platform, tells me that sugar consumption in Cambodia  has risen with almost 560% between 1997 and 2015. The enormous consumption of sugar is a recent trend. Sugarcane production has become a large industry in Cambodia during the continuing economic development. A big part of the production is domestically consumed.

However, not sugar but rice is the bulk food of the Khmer. Normally it is eaten with a bit of fish sauce and some spices. Rice is also one of the major crops in Cambodia. Many of Cambodia’s indigenous food plants were wiped out during the Khmer Rouge reign of terror. When it was safe enough for foreign aid groups to return, the International Rice Bank dipped into its reserves, returning more than 400 rice varieties to Cambodia. I found these two readily available home grown products in combination many times.

When I would ask for “no sugar” in my food and drink orders at the Phnom Penh food stalls, the kind Khmer people could not believe me to be serious, more than half of the time they would still prepare my food super-sweet by adding a spoon or two. I have to admit that once I got used to the sugar, my fear also disappeared. For me sugar wasn’t a treat or a threat anymore, it was just a part of daily life. But I still think children should eat their veggies every once in a while.