Plotting Against Democracy: Conspiracy Theories and Their Ramifications on Politics

“Gravity as a theory is false. Objects simply fall.”

You can find this answer to the question “What is Gravity?” on the website of the Flat Earth Society. This is, as the name says, a group of people promoting the concept of an earth shaped like a pizza – and the internet is full of groups like this one.
If you let the Google search dig shortly into the topic of conspiracy theories, you will find highly absurd conspiracies easily. You will find theories about the Rothschild family being a tribe of lizard people coming from a different dimension and governments controlling their population by making use of ominous chemtrails.

You will also find a theory stating that the plane of flight MH370 was hidden away to be shot down as flight MH17. Why? Because a group of HIV researchers were aboard flight MH17. But why should someone be keen on killing HIV researchers? According to certain blogs and other websites, it is as simple as that: the researchers on the plane found a cure to HIV, which is a virus developed by the “Global Elite” that wants to diminish the world population. As the ominous “Global Elite” wanted to pursue fulfilling their plan, they had no other choice to keep their secret from being published than hiding the plane of flight MH370. The same plane was then shot down as flight MH17 several months later by “armed forces” of the Ukrainian war to make the mentioned HIV researchers disappear.

The list of theories absurd as interesting in their own way may be continued endlessly: reaching from the death of Kennedy or Princess Diana, over varying groups like Freemasons, Illuminati or the Jews controlling the global finance systems to the belief that 9/11 was orchestrated by the CIA. While many of these theories often seem grotesque yet fascinating, it has to be kept in mind that conspiracies possibly pose a threat to democratic politics.

Historically, conspiracies have been used as instruments by totalitarian regimes. The Nazis for example propagated false accusation about Jewish people whereas Stalin coined the term “Trotskyism” to get rid of some of his opponents. Today, conspiracy theories erode trust in democratic institutions and cause vexatious work for governments and scientists. The conspiracy about Barack Obama not being a US citizen is a good example of that: Arizona based Sheriff Joe Arpaio together with other Republicans made the State of Hawaii and White House issue press releases on Obama’s original birth certificate.

Next to simply creating work for officials, conspiracy theories have the capability of directly influencing on democratic elections. Using conspiracy theories as a means to gain public support was a prominent feature of the run-up to the US elections in 2016. Donald Trump’s electoral campaign was helped out by supporting different conspiracies. 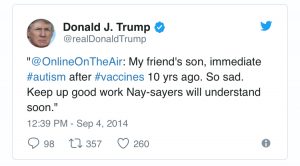 Additionally, denying climate change cleared the way for promoting policies harmful to nature. Although not publicly supported directly by Trump (but instead by his advisor Michael Flynn), the “Pizzagate” conspiracy theory about Hillary Clinton running a pedophile ring in Washington DC eroded trust in Clinton and the Democratic Party in some parts of the population further. In a poll conducted a
fter the election, a frightening 46% of Trump voters and surpringly even 17% of Clinton voters regarded the “Pizzagate” conspiracy as true. Research shows that the belief in conspiracy theories is not only limited to one side of the political spectrum, as at the same time, 87% of
Clinton voters believed that Russia hacked Clinton’s e-mails to influence the upcoming elections. These numbers clearly illustrate the importance of conspiracy theories today. 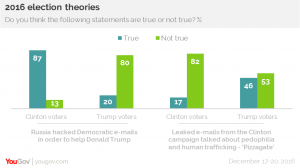 Conspiracy theories have existed for many years and will exist further on. With the emergence of social networks like Facebook or Twitter and their respective echo chambers conspiracy theories will continue challenging democracy and its institutions in the future.