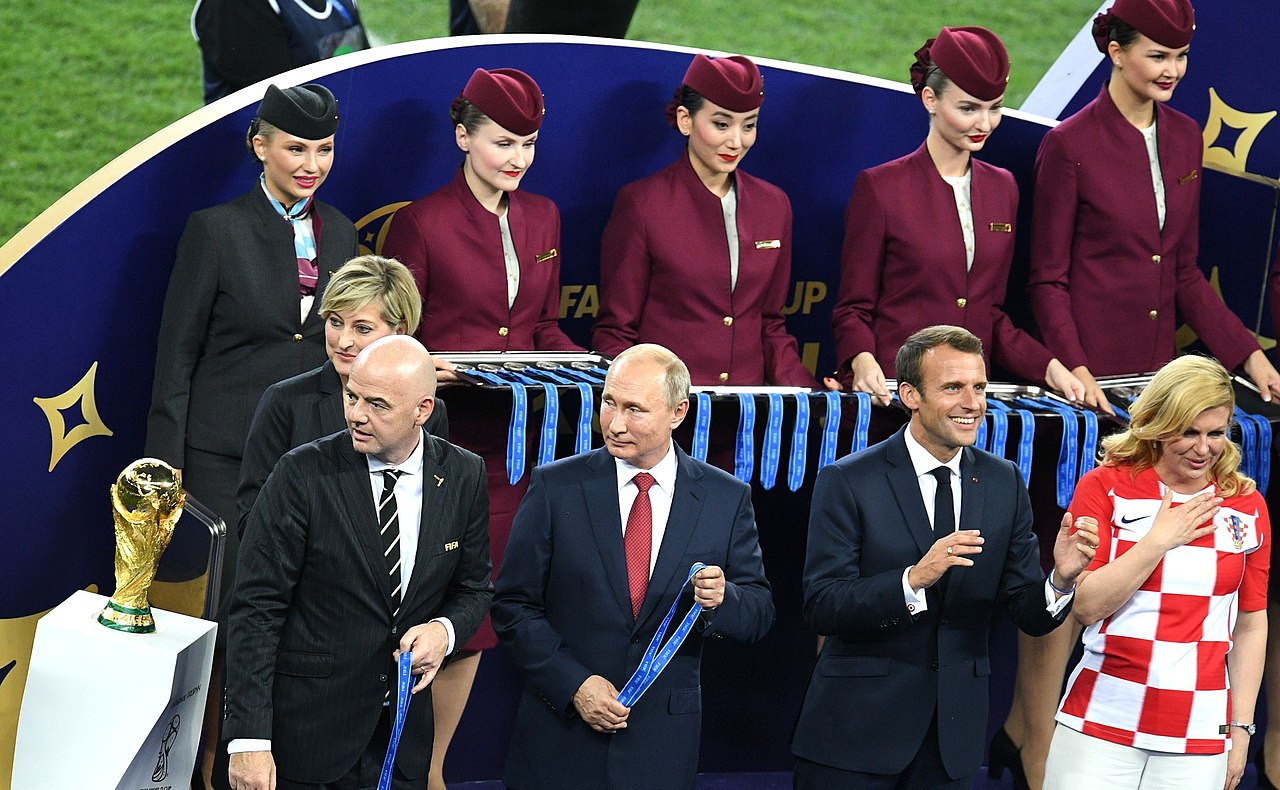 “Football brings us together in one single team and we are united by our affection for this spectacular, vibrant, uncompromising game. Players of these teams have a great degree of mutual understanding, a unity which cannot be affected by different language, ideology or faith. It represents the power of football and sport as a whole. The power of its humanistic beginning.”

These glorious words, spoken by the President of Russia, were breathed in by millions of football fanatics just minutes before the very first whistle of the premier match of the 21st FIFA World Cup. This year, out of the 200 teams participating, thirty-six qualified for the final stage of the Cup. The next few weeks, the world spectates, as the best players, coaches and backers of these thirty-six countries gradually disqualify in their struggle to win the ultimate prize of the tournament: a trophy and eternal(-ish) glory.

With three million tickets sold and billions of online streams, the World Cup is incontestably one of the most cosmopolitan sporting events in the entire world. Hence, its organisation is not a minor responsibility, but an expensive and challenging task. However, despite the risks of such an endeavor, if the organiser manages to pull out a successful tournament free of controversies, this will undoubtedly enhance its international reputation. Not surprisingly perhaps, the football celebration in Russia is tailed by a shadow of controversy, which has begged the reassessment of an age-old question: can football ever be entirely separated from the bickering politics between nation states?

This year, the set-up would seem to be exceptional even with regard to the longish history of FIFA (Fédération Internationale de Football Association), who has been responsible for organising international football tournaments ever since 1930. In spite of having existed for 88 years, only three states with autocratic characteristics have won the bid to host the tournament: the Argentinian military junta in 1978, Russia in 2018, and Qatar, host of the next Cup in 2022. Thus, it is not dumbfounding that a great deal of controversy rose after these appointments and further superheated the corruption accusations against FIFA.  The scandal in the past years led to a number of resignations by central figureheads and moreover pushed FIFA to implement internal changes in order to renew its credibility.

Why is the appointment of new host countries then so disputed? The reason lies within FIFA’s aim to support the foundations of football infrastructure to less-football-developed countries, despite the costs which arise from realising a megalomaniac tournament. South African World Cup in 2010, for example, is a textbook example of the implications. The expensive stadiums and hotels that were built before the tournament are now left to degradation, as there plainly is no more demand for them. On the other hand, Qatar is currently building a similar type of infrastructure for a challenging climate causing international outcries due to the high death tolls on the construction sites.

The Russian case has its own controversies, as its international reputation has gradually deteriorated in the eyes of most of the Western countries, following the Crimean annexation, Ukrainian war, electoral interventions and most recently the alleged poisoning in the UK – to name a few examples. Over the years numerous opposition movements have risen against the hosting bid of Russia, including the boycott requests by the Members of the European Parliament, the Human Rights Watch, the 89up and an Australian citizen initiative. The demands of these outings have been unequivocal: the leadership and the citizenry should draw back their participation. Yet, excluding the notable absence of the Western leaders from the games, the Western football fans are still present and filling up the stadiums. What is more, despite the icy state politics, Americans were the number one biggest group buying tickets for the matches.

For this reason, the acclamation made by Putin suggesting that football is more humanistic than political might seem logical. Perhaps the power of football is in uniting people and the World Cup is a symbol of forgetting, of new beginnings?

From Putin’s point of view, this is of course not the case. Even though hosting a World Cup might not prove to be beneficial in short-term due to the infrastructural losses, some scholars, such as Yundong Liu for example, point out the benefits in the long-term. If a country is able to sustain a positive imagery throughout the Cup, a positive correlation of economic growth and the World Cup can be detected due to the increase in attractiveness to invest as well as increased consumption. For this reason, even though some financial companies have denounced that there would be significant economic benefits for Russia as a consequence of the hosting duty, these estimates largely ignore the long-term analysis. In long-term, it can be expected that the appearances of the Saudi Arabian crown prince Mohammad bin Salman and the South Korean president Moon Jae-in’s as guests of Putin, is a signal of increased trustworthiness of Russia in the eyes of the international community.

For the above-mentioned reasons, many question the effectiveness of the Western leader boycott. As many in the modern day tend to think that the political limits itself inside the walls of parliaments, there is little incentive for a citizen to skip watching the World Cup.  In other words, the football fans are little concerned with great power politics and the freer movement between states allows an individual to remain ignorant to their nation’s stance.

However, an exiled business man and a persistent critic of the Kremlin, Mikhail Khodorkovsky, does not seem to consider this a problem per se. In his opinion, the right place for a boycott is indeed the governmental level, whereas the people should visit the Russians and the society freely. In his view, attending an event such as the World Cup is a way to show the Russian citizens that their government has created enemies in places where they do not exist in reality. By showing up to the world cup and creating friendly nations between citizens, internal controversy may be triggered. He further contends that football can establish links of transnational solidarity, for example with regard to LGBT rights, which carry the potential for change in Russia.

Nevertheless, despite the attractiveness of Khodorkovsky’s arguments, the attributes of the Russian state should not be forgotten. In a state of limited press freedom and freedom of speech, framing may and does happen in the most Kremlin-optimal manner. What is more, as long as the World Cup is seen as  apolitical, a danger of limited analysis prevails. If words, such as those used by Putin in his opening extract are not analysed beyond their flourishing appearance, the underlying implications might be grave. Mind you, that the last time Russia hosted an international sporting event in 2014, the celebration of athletes and the rhetoric of global unity, quickly turned into great power politics and annexation of land.