The Curious Tale of the Houbara: Birds and Middle Eastern power politics 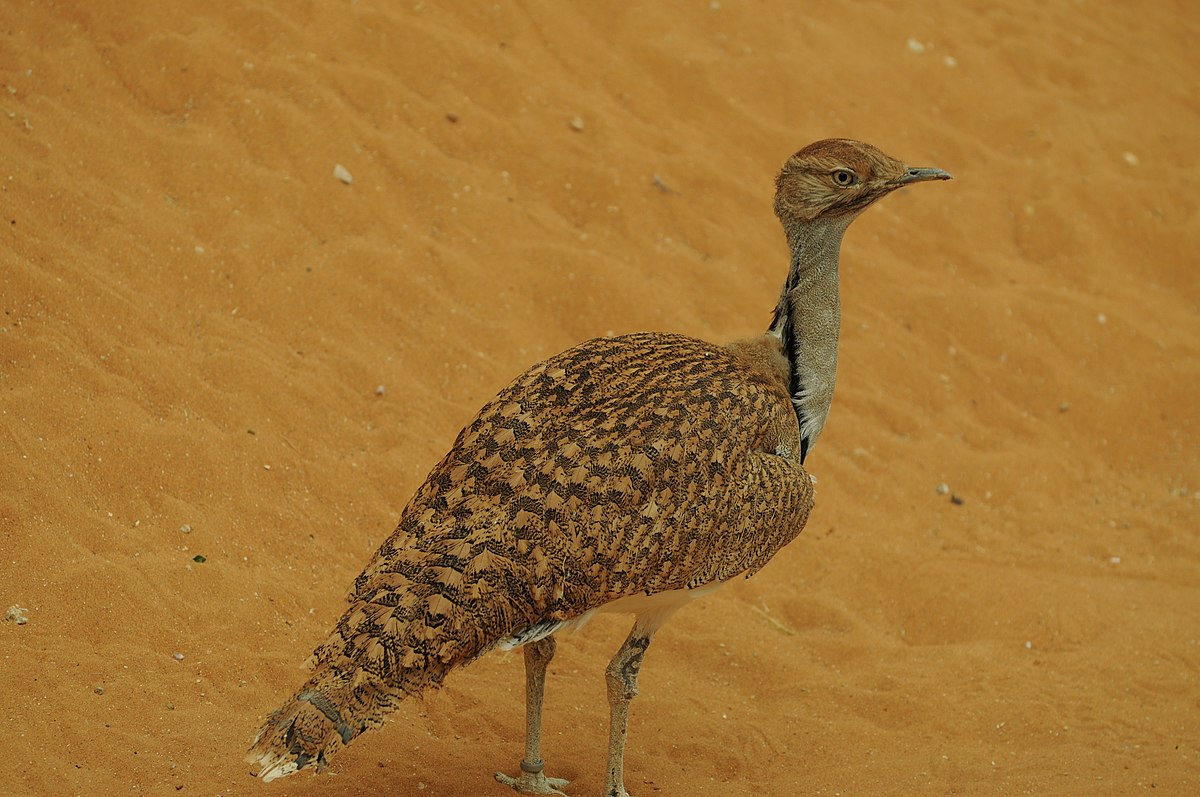 The Houbara is a species of endangered ground bird the size of a turkey that lives in the deserts of Central Asia and the Arabian Peninsula. At first glance, it’s an unremarkable creature: shy and wary, it uses its drab brown and grey colors to blend into its desert environment and escape detection. Looks can be deceiving, however; this unassuming bird takes center stage in a political drama involving Pakistani farmers, Arabian royalty, the CIA and some of the world’s most high-profile terrorists.

Houbara hunting has a long and storied history as the ‘game of kings’ in the Arabian peninsula. Like Rhinoceros horn in traditional Chinese medicine, Houbara meat is believed in traditional Arab folklore to be a very potent aphrodisiac. Thus, although the meat is rather dry and not particularly tasty, it is an extremely sought-after delicacy. It should therefore come as no surprise that Houbara hunting is the sport of choice for aristocrats and other wealthy individuals looking to show off their status, particularly in the Gulf States and Saudi Arabia. Naturally, kings and princes also indulge in this royal pastime; members of all the royal houses of the Arabian peninsula have been known to go on hunting expeditions to chase after these prized birds.

Traditionally, the hunts took place from the back of camels, using specially trained hunting falcons. As the Arabian royal houses amassed astronomical oil wealth during the 20th century, however, their hunting gear received an upgrade. The camels were replaced by state-of-the-art SUVs equipped with radar technology to track the Houbara on rough terrain. The traditional tent camps made way for sprawling, luxurious camp complexes containing all the luxuries the sheikh and his hunting party are accustomed to. The falcons remained, but rather than catching and training their own, the sheikhs now import whole armadas of falcons from places as far afield as Iceland and Russia, with single falcons sometimes costing upwards of 250.000 USD.

As the Houbara is a migratory bird, breeding on the steppes of Kazakhstan and Uzbekistan, the hunts take place in the winter, when the animals move down to the Middle East to escape the cold. Previously, many birds wintered in the Arabian Peninsula, but with the rise of radar technology and all-terrain automobiles, overhunting has effectively eradicated the Houbara from that region. With their quarry now hard to find at home, the hunters have turned to Pakistan, where the Houbara still winters in substantial numbers.

However, as the Houbara is an endangered species, it is protected under Pakistani law and so cannot be hunted – at least not by Pakistan’s own people. The Pakistani government, however, issues hunting permits to foreign dignitaries as a tool of ‘soft diplomacy’, in order to promote good relations between Pakistan and the wealthy Gulf states, and to get some extra income from the permit costs.

The local people, however, hold less favorable views of their distinguished guests: the sheikhs often exceed their hunting permits, which cap at one hundred birds per party, with one Saudi prince killing as many as 2600. Furthermore, if a Houbara is spotted on someone’s farmland, the land is appropriated by the sheikhs hunting party and the farmers can’t tend to their crops – or even access their plots – for weeks on end. The hunters have little regard for the farmland they appropriate, often driving their SUVs straight through crop fields, damaging the plants and potentially ruining harvests and livelihoods.

This callous disregard for local farmers who depend on these crops for their livelihood has sparked fierce political debate in the Pakistani government. Last year, a province governed by Tehrik-e-Insaf, Pakistan’s main opposition party, imposed a blanket ban on Houbara hunting, banning Qatari prince Sheikh Abdullah bin Ali al-Thani from his usual hunting grounds. In response, the national government allotted him a plot of land elsewhere in the country, sparking protests from farmers in that region, who feared for the safety of their lands and livelihoods. Ultimately, the sheikh decided to cancel his hunting trip as his safety could not be guaranteed.

All this begs the question why the Pakistani government apparently holds the recreational interests of foreigners in higher regard than the livelihoods of its own population. As is so often the case, the reason is economical. Many Pakistani immigrants live and work in the Gulf states and send money back home, providing Pakistan with crucial income in the form of remittances. As many Gulf states are effectively autocracies, the sheikhs can exercise a great deal of control over these cash flows. This position of power means that the sheikhs often have little to fear from the long arm of the law in Pakistan, and they are effectively free to do as they wish within their hunting camps.

This includes associating with some unsavory individuals: from time to time, reports surface of terrorist leaders visiting these Arabian hunting camps to participate in the hunts and engage in some soft diplomacy of their own. Most notably, notorious Al-Qaeda kingpin Osama bin Laden was found to reside in a royal Emirati hunting camp in 1999. The CIA almost authorized a strike on the encampment, but ultimately withheld for fear of killing the Emirati royal and sparking a diplomatic crisis. Bin Laden and other visiting terrorist leaders live in the shelter of these camps for weeks, or even months, in the lap of luxury.

The luxury of these camps, however, also proved to be a major asset in the War on Terror in an unexpected way. As the sheikhs have to bring effectively all of their ostentatious extravagances from home, supplying these exuberant but remote camps by road from conventional airports would be a logistical nightmare. To avoid having to transport their valuable belongings by road through hundreds of miles of Pakistani outback, the sheikhs built their own airfields near their usual hunting grounds. Dozens of these airfields lie scattered throughout the emptiest parts of Pakistan, most of them only being used in the winter hunting season.

Some of them, however, have been repurposed after coming under new ownership. One of these airfields is Shamsi Airfield, located in the center of Pakistan’s empty Kharan desert. It was built in the early 1990s to supply Houbara hunting camps, but abandoned just a few years later as Houbara numbers dwindled in the area. After 9/11, however, the CIA secretly took over Shamsi Airfield for hunts of their own, with predator drones instead of falcons. Shamsi Airfield became a base from which the Americans scanned the Pakistani and Afghani deserts for terrorist activity, and launched drone strikes on terrorist hideouts. It was operational for a decade, after which the Pakistani government publicly admitted to leasing the base to the CIA. This sparked large-scale protests across Pakistan, forcing the Americans to leave. Shamsi Airfield is just one of many such bases, however. Official data on these bases is, naturally, a closely-guarded secret, but it is believed that there are at least half a dozen other such airfields that have been overtaken by the CIA.

The tale of the Houbara is, truly, a fairytale for the modern day. Through the power of ancient folklore, an unassuming desert bird was propelled to the upper echelons of Arabian society. There, it became embroiled in political intrigue, international power dynamics and, ultimately, both sides of one of the most controversial military campaigns of the 21st century. No unremarkable feat for a creature evolved specifically to avoid attention.

1 thought on “The Curious Tale of the Houbara: Birds and Middle Eastern power politics”