Educators on Strike in Chicago: Demanding Changes that Extend to Broader Social Issues 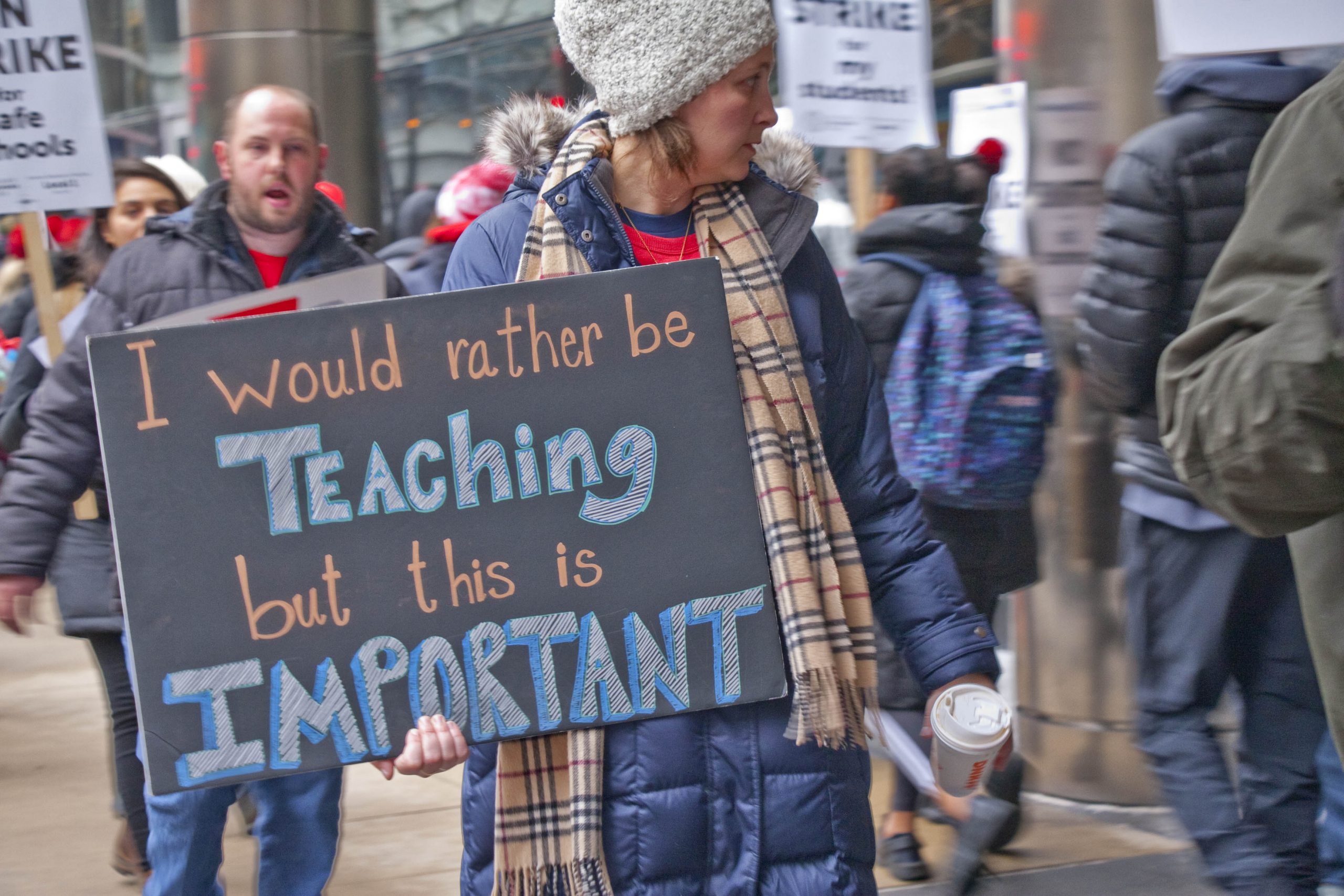 In October 2019, educators in Chicago were on strike for 11 days straight, demanding more funding for education, but also addressing broader issues. The school district in Chicago is the 3rd largest one in the US. A significant part of the students in public schools in Chicago is poor and has already experienced violence or grief at a young age. There is a high degree of segregation between schools and graduation rates are low. Classes in Chicago schools have a relatively high number of students, in combination with fewer teachers that possess an advanced degree. Furthermore, less state investment is available per pupil. Even though Chicago is still millions of dollars in debt, more money is now available for education, in comparison to the last time teachers went on strike in Chicago, in 2012.

Teachers demanded more money to go to education, especially to raise teacher pay, be able to shrink large classes and increase the amount of support staff, with a focus on nurses and social workers. Some students in public schools have experienced traumas that are incomprehensible for others in wealthier neighbourhoods. Yet, less (mental) health services are available for them. Hence the urgency for more support staff: when students are bothered by trauma, they cannot concentrate on their school work.

After days of negotiating, the leaders of the Chicago Teachers Union were able to strike a deal with the city officials: 35 million dollars will be spent a year to reduce oversized classrooms. Additionally, there will be an increase in staffing, which makes the Union’s wish for a social worker and a nurse in every school a reality. Furthermore, a pay raise of 16 percent for teachers and a 40 percent rise for teaching assistants will be realized in five-year contracts. These investments will increase the investment per pupil and in that way enable smaller classes.

But there is more to these strikes than simple pay. These striking teachers and labour unions are part of a bigger movement, focusing on social justice. They are part of the Bargaining for the Common Good Network, consisting of unions, community groups, racial justice organizations, and student organizations. They use the right of unions to bargain during contract fights to include broader demands that will benefit the community as a whole, so beyond wages and benefits for solely the bargaining unit. The movement focuses on various sectors and issues, such as racial justice, education, immigration, climate justice, and public services. For education, they aim for the establishment of community schools, which will have extended services for the community as a whole and allow the community itself to have input in school governing decisions. Furthermore, there is a focus on the education of ‘the Whole Child’: physical activity, arts, music, languages and creating science experiments and more, are incorporated into the curriculum.

An uncommon demand of the teachers was an expansion of affordable housing. Housing in Chicago is expensive and there is a high cost of living. Consequently, a lot of teachers cannot afford to live in the area where they teach. Furthermore, homelessness and housing instability of students is a huge problem. Thus, teachers want more support for homeless students. They want more commitment from the city to establish sustainable housing and enable school staff to get housing subsidies. The mayor of Chicago, Lori Lightfoot, does want to focus on affordable housing. However, she thought the contract negotiations with the teachers were an inappropriate place to address this issue. It is thus not incorporated in the Chicago contract.

The educators in Chicago were not the first ones to protest against low teacher wages and deep budget cuts on education. The teachers in the conservative states of Arizona, West Virginia, Kentucky and Oklahoma preceded them in 2018. In January 2019, the movement expanded to progressive states when educators in Los Angeles challenged the cities’ investment in public education. The demands in LA were similar to those in Chicago, also resulting in an increase of in-school nurses and social workers and smaller classes.

So, the strategy of ‘bargaining for the common good’ certainly seems to work. The Chicago strike, however, is the first one to emphasize homelessness and affordable housing, and by that addressing broader social issues. Even though the teachers did not get everything they wanted regarding the demands that extended beyond school issues, they achieved more than they ever did before, and are an inspiration for educators across the US facing similar issues.

‘This Is for Our 16,000 Homeless Children.’ How the Chicago Teachers’ Strike Extends Beyond School Issues: https://time.com/5707330/chicago-teachers-strike-homelessness-issues/

Chicago teachers’ strike is over, students and educators will return to school on Friday, mayor says: https://edition.cnn.com/2019/10/31/us/chicago-teacher-strike-thursday-makeup-days/index.html