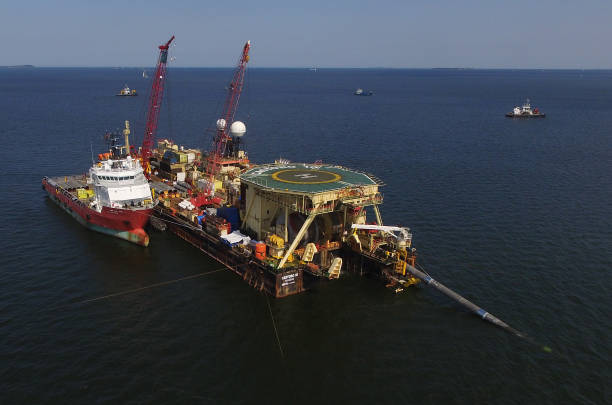 A vision, a major construction work, and sanctions – Nord Stream 2 in three words. Estimated to be operational by early 2020, the pipeline remains incomplete due to increasing tensions between Russia and the West. While Russia is intended to be provided with more direct access to the European gas market, Europe is to be provided with sustainable gas supply in turn. Controversy around the pipeline has existed ever since the beginning of its construction in 2018. Its construction reached an arctic moment in the pipeline’s suspension in December 2019 because of US sanctions targeting the project’s contractors and financial investors.

Nord Stream 2 stretches approximately 1,230 kilometres through the Baltic Sea all the way from the Russian shore to Germany. This twin pipeline runs parallel to the already existing Nord Stream system and is to funnel double the amount of gas through the Baltics compared to its twin. Nord Stream 2 passes through the water of five Baltic Sea nations: Russia, Finland, Sweden, Denmark, and Germany. Preparation and logistics around this pipeline were intensive and exhaustive as not only each country has its own set of conditions, but constructionists also needed to consider an environmental and sustainable approach.

Climate activists and environmental NGOs tried to stop the construction of Nord Stream 2, accusing it of polluting Germany’s Baltic coast with toxic grease that can be found on beaches and in the sea. “Tennis ball-sized” lumps of pink-purple oil have been reported to be washing ashore. Some of it has been washed into areas covered by the EU’s Natura 2000 environmental protection program. Meanwhile, Nord Stream 2 reports on its website that it has been working rigorously on environmental, health, safety, and social standards to protect the Baltic Sea environment and the communities affected by the project in all ways possible by monitoring potential environmental impacts to preserve ecological diversity. Arguably, this is “geopolitical bluff” to realise economic pursuits.

Alongside environmental discussions and condemnations, US sanctions and recent European sanctions linked to Russian behaviour towards Kremlin opponent Navalny have led to an upsurge in the construction environment. In 2019, the European Commission described the US sanctions as a breach of international law and was looking for solutions to commission the pipeline as soon as possible. However, there now seems to be a different consensus about the pipeline and rising fear that Europe will get all too dependent on Russian gas. Nord Stream 2 is already 94% finished. Taking its construction to a complete halt now might be a victory for climate activists and environmentalists. However, this move would be counterproductive considering the immense economic loss. It remains to stay vigilant about this close-to-finished and controversial pipeline that demands great attention amongst economists, environmentalists, and politicians.