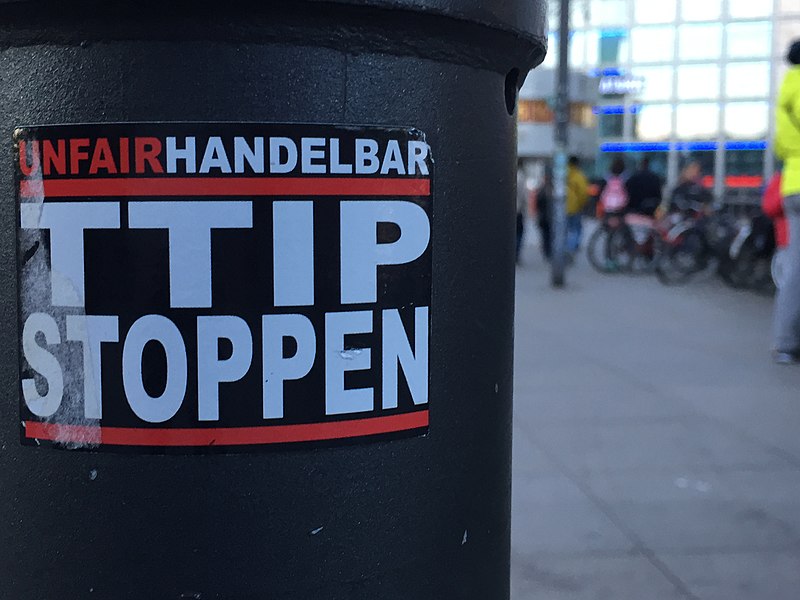 Recently, thousands of protesters took it to the streets across Europe to oppose what could be the biggest free trade agreement, the Transatlantic Trade and Investment Partnership (TTIP) between the European Union and the United States.

The economy must grow, this is a fact, and a way of promoting this is free trade. Trade without barriers to the welfare of everyone, those are the promises made by politicians. Critics, however, call out for caution:” business interests will dominate us,” they claim. But what benefits would the finalisation of TTIP, estimated for 2016, really bring? And what would TTIP bring specially for Europe?
To elucidate the effects of a free trade agreement one can turn to NAFTA (North American Free Trade Agreement) between the United States, Mexico and Canada. Similar promises such as welfare and more employment were made when concluding NAFTA 1994. Today, NAFTA has been in force for over 20 years and all forecasts of critics have become reality. An illustration is what locals call the “Rust Belt” in the North-eastern part of the US, where the industry was flourishing until the mid-20th century. A decline to several economic factor made companies relocated, to benefit from lower wages. First into the cheaper South of the US, shortly after, to Mexico, permitted by NAFTA.

The promised US trade surpluses with Mexico turned out to be deficits, some hundreds of thousands of jobs were lost, and there was downward pressure on US wages.

Nevertheless, the effects for Mexico were worse. The most basic measuring tool of economic progress is GDP which since 1994 only increased by 1 percent annually. One could argue that could also have happened to without NAFTA, but reassessing Mexico´s growth prior NAFTA reveals that there was significant growth which almost doubled GDP between 1960-80s.  Eventually, neo-liberal policy changes deemed to end economic growth, which only was consolidated by NAFTA.  Canada had by far the strongest gains by NAFTA, though, a free trade deal between Canada and the US predated NAFTA, which makes a causal relation rather difficult. One, if not the biggest problem, revealed by NAFTA were the diminishing labour and social standards, also of concern to several European TTIP critics today. Free trade areas can create loopholes for companies to avoid compliance with certain standards. Like in the case of NAFTA, companies bypassed wage-standards. TTIP could consequently implicate the lower US labour and social standards to the EU.

The latter sounds as if everyone is on the losing side of free trade agreements, but no, multinational companies benefit remarkably of those deals. Medium till large sized companies will safe huge amounts of transactions costs when exporting since free trade means accepting each other’s standards. But it also means more competition as market access to foreign companies enhances, which again demands for losers. Inevitably, as also seen in the case of NAFTA and Mexico, free trade agreements further the gap between the rich and poor. The elite, involved in trade, will become more powerful and eventually richer. That could potentially disrupt North and South European relations if the North will continue gaining advantages of the free trade but leaving the South as economically unstable behind. Combining the two huge economies of EU and US could as well lead to shortages for other economies like China. The emergence of new actors on the market, mainly China and the BRIC countries, questions whether TTIP has a hidden agenda and symbolizes the start of “the West against the Rest”.

Ultimately the national governments of Europe will have to decide on TTIP. The fact that the negotiations regarding TTIP are being held in secret and lacks transparency only heightens suspicion among opponents and will lead to more protests in Europe.