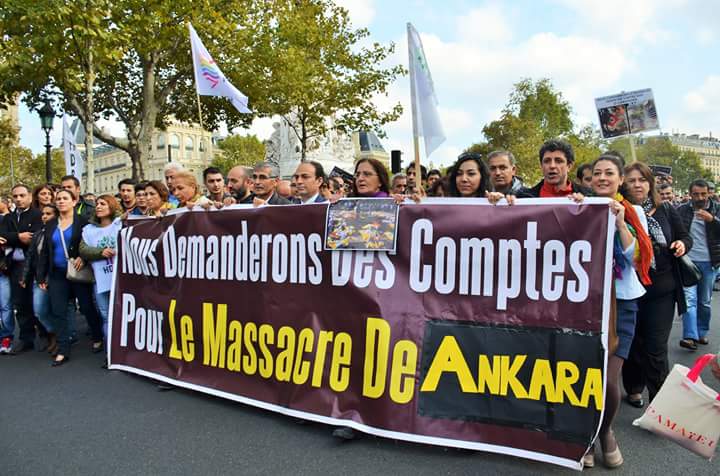 “There has been a vicious terrorist attack in Ankara Train Station at 10:04 am on 10th of October. This attack is an atrocity against the Turkish Republic.”  Turkish President, Tayyip Erdoğan.

“We saw flags and pieces of bodies flying into the air. People were injured and running around unconsciously (..) I will never forget the smell of burned human flesh”

Two bomb explosions targeted hundreds of people that gathered together to protest against violence between Turkish authorities and the Kurdish militant group, the PKK. Videos and pictures capturing the bombings were spear all over the internet. In one video, a young man was cheerfully protesting for peace, when all of a sudden, the ground started shaking and a flash of light covered the street with burned human flesh and despair. That men was Goksel Ilgin and he was interviewd for “The Telegraph” after the bomb incidents. “We started dancing the ‘halay’ dance as we were cheerful and determined to promote peace,” said Mr Goksin,“Then we heard a sudden blast about 15 meters behind us. After the explosion I was overcome by shock. I fell on my knees, and couldn’t believe what I was seeing. Then 15 seconds later there was a second blast. We saw flags and pieces of bodies flying into the air. People were injured and running around unconsciously (..) I will never forget the smell of burned human flesh. Even after I left the scene, I couldn’t help feeling it. So my friends made me smell some flowers and perfume to stop it. It took a few hours to smell the air again.”

Mehmet Muezzinoglu (Minister of health in Turkey) announced that“186 patients are being treated in our hospitals. 28 are in intensive care, 18 are operated right now. Sadly we have lost 62 people during the attack, and 24 have died afterwards, having arrived in our hospitals in critical conditions.” The Prime Minister of Turkey, Ahmet Davutoğlu  declares 3 days of national mourning.

Those two unknown suicide bombers have increased even more the level of international responsiveness against terrorism. NATO Secretary General, Jens Stoltenberg, stated today: “I strongly condemn the terrorist attack in the center of Ankara that killed and injured dozens of people. There can be no justification for such a horrendous attack on people marching for peace.” At the European Union level, Federica Mogherini, High Representative for Foreign Affairs announced that: “Turkish people and all political forces must stand united against terrorists and against all those who try to destabilize a country that is facing many threats .As the EU, we are determined to defeat those who want to disrupt and destabilize societies.” Moreover, “the Russian head of state expressed the hope that those who ordered and committed this cynical crime will be punished deservedly and reaffirmed willingness to work together with the Turkish authorities as closely as possible in opposing the terrorist threat,” the Kremlin press service said.

The context of this incident is “spicier” than it appears. This horrible event just happened three weeks before the general elections (1st of November). Those elections are placed in the middle of both national and international security concerns for Turkey: ethnic conflict within borders and Turkish military intervention against ISIS outside borders . Security chaos started on 20 July 2015, when ISIS claimed responsibility for the 32 human deaths caused by suicide bombing on the Turkish territory, in Suruç. As a response, Turkey authorized air-strikes against both the ISIS militants in Syria and Kurdistan Workers’ Party (PKK) militants in Northern Iraq. Ironically, Kurdish militants were also fighting against ISIS. On a domestic level, this resulted in a tireless ethnic conflict between the Kurdish separatists and the Turkish government.

10,000 people gathered in Ankara for an anti-Erdoğan manifestation. They were screaming: “Erdoğan is a killer!” on the famous Istikal boulevard.  Also in Diyarbakir (South-Eastern part of Turkey ; a city with Kurdish majority) protests started on today’s afternoon but were “calmed down” by the police’s tear gas grenades.

Can we see an end to this internal and external security instabilities?The peace rally set for today in Ankara constituted a voice that summoned peace among Turkish and Kurdish people. If we learned something today, it is that Ankara’s voice will never be silenced by neither terrorists nor by the Turkish government’s way of ensuring domestic and international “order”.