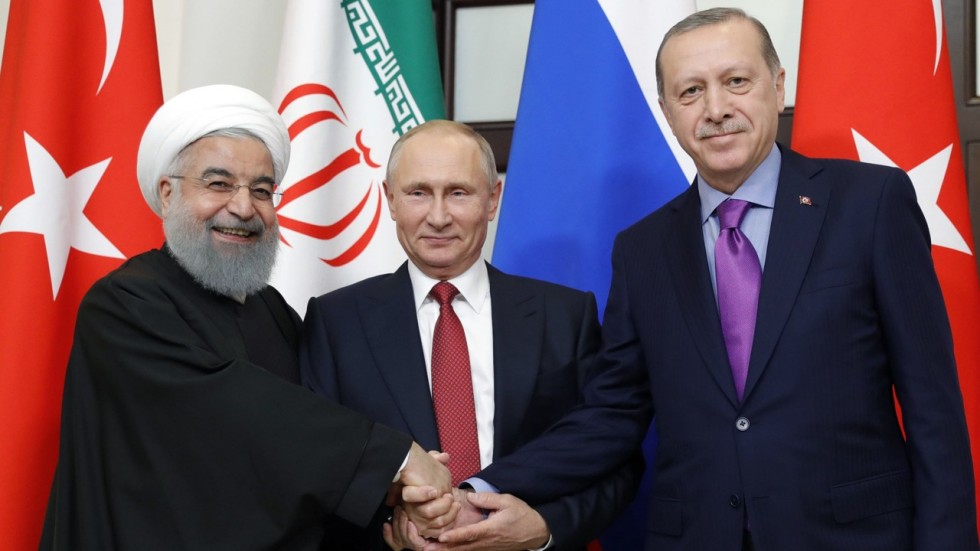 In the abundant chaos in the streets of Homs, the unprecedented destruction of the sites of Palmyra and the stains of blood on the walls of Aleppo, Russia, Iran and Turkey have found opportunity. Together they crave to reshape the regional – and potentially global – balance of power. With president Donald Trump pushing the United States on the isolationist track once again, these powers are eager to jump into the power vacuum and defy American hegemony. The desire of Russia and the Middle East’s regional powers to settle disputes through a multilateral system rather than through a unilateral decree from Washington was put into practice last week, when Russian president Vladimir Putin pulled off a bold stunt. In an audacious move of taking responsibility for ending the civil war in Syria, he invited Syrian president Bashar al-Assad and subsequently Iranian and Turkish presidents Hassan Rouhani and Recep Tayyip Erdogan to his vacation resort in Sochi.

The story of Russia mingling in the Syrian Civil War does not begin with Putin’s peace building plans. Already way back in September 2015 Russian planes started dropping bombs on any party opposed to the Assad regime. At this time, the Syrian Civil War had been ongoing for more than three years, drawing more and more players into the conflict. Indeed, by the time Russia started its military activity in Syria, government loyalists, democratic reformists, Islamic extremists and Kurdish and Turkmen separatists were already engaged in the conflict. Meanwhile Western bombers and Iranian and Hezbollah militias turned the Syrian Civil War into a truly international battleground. Putin’s decision to back Assad put him at odds with the United States, that backed a range of opposition parties. Every move would have consequences, not only within Syria’s borders. The risks of engaging in the Syrian Civil War did not lead to Russian caution, as Russian bombing raids quickly turned the tide of the war, which Assad had been prone to lose until Russian intervention. As Assad’s regime moved its back from the wall to become the most powerful player in the conflict, there was little hope for a swift end of the war. Despite multiple ceasefires and negotiations the conflict was indeed still dragging on over two years after the people of Syria first heard Russian bombers flying over their villages, towns and cities.

As these very villages, towns and cities have all been reduced to ruin, the Syrian opposition has equally been crushed by Assad’s regime, with the help of most notably Russia and Iran. Now that Assad has re-established control over large parts of the country, Putin has taken the initiative to rebuild Syria. During his meeting with Assad in Sochi Monday 22 September he discussed mopping up the remaining rebel groups through negotiations and rebuilding the piles of rubble that were once cities as Aleppo and Homs. His meeting with Rouhani and Erdogan two days later was more significant, as different zones of influence were negotiated between the most powerful players in Syria. Similar to Europe during the aftermath of the Second World War, Syria has been divided into so-called de-escalation zones. With the conclusion of the talks, the Assad regime has been considered the only legitimate political entity in Syria, so the goal of Washington to dispose Assad from his position and bring him to trial is less realizable than ever before during the civil war. In general, the vision of the United States concerning how to rebuild Syria, which strives for elections as soon as possible, with a preliminary government composed by the Syrian opposition, is completely disregarded by the countries that actually have the ability to shape Syria’s future: Russia, Iran and Turkey.

Equally – and arguably more – important than the direct result of the meeting is its meaning: Russia, Iran and Turkey had reached consensus in Sochi, while this had never been achieved in negotiations in Geneva, hosted by the West and heavily influenced by the United States. The result of the Sochi talks can be seen as the materialization of diminishing United States hegemony in an increasingly multilateral world order. But, as Putin condescendingly assured, he would make sure to call president Trump to update him of the current state of affairs. Trump, while not expressively stating his opinion of the lack of any US role in the peace building progress, did say that his conversation with Putin had been ‘a great call.’ Fitting in his policy of isolationism, the US president therefore heavily implies he does not see Putin shaking at the foundations of US unilateralism as a necessarily bad development. While the Sochi negotiations surely indicate change for Syria, what awaits the country at this point is hard to say. As the Syrian Civil war after six years of horror finally seems to draw to an end, its cities lay in ruin, its population dwells in despair and  its leaders retain their power only through foreign help. Meanwhile regional powers, in cooperation with Russia, decide on the future of the country. Therefore, while no-one has really won the Syrian Civil War, there is arguably one big loser: the United States of America.