The Identitarian Movement on the Rise: Understanding Europe’s New Alt-Right 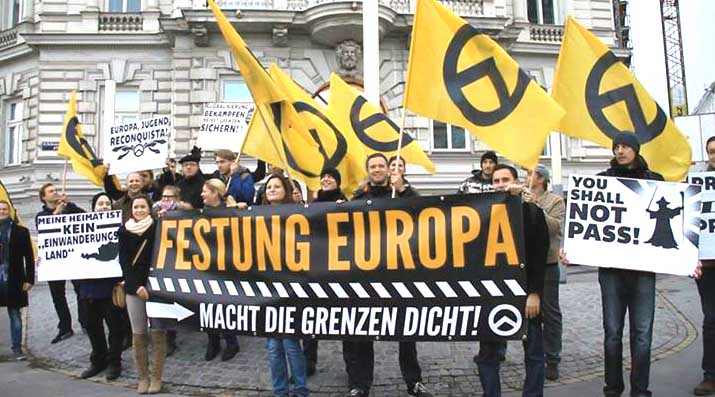 For a long time, white supremacists could be identified relatively easily: a bunch of skinheads, tattooed all over with illegal Nazi symbols, drinking beer and shouting out flat slogans about migrants stealing jobs and wives from the supreme white population. In the last years, this image began to change. The rise of a group of far-right activists calling themselves the “Identitarian Movement” brought attention to young white men not wearing army boots but Nike or Vans sneakers, not wearing shirts depicting swastikas but slogans like “Islamists not Welcome” or “Still not loving Antifascists”. While the underlying claims do not differ greatly from the slogans of white supremacists, the Identitarian Movement has changed the way these racist and nationalist claims are promoted throughout Europe.

The Identitarian Movement emerged at first in France in 2003 as the “Bloc Identitaire”, a political party devoted to fighting back the steady Islamization of Europe. Boosted by Islamist terror attacks in France and Belgium, the refugee crisis and, equally important, the emergence of filter bubbles in social media, similar groups –although not political parties- emerged in Scandinavia, Italy, Germany and Austria and, most recently, in the UK and Ireland.

A big difference between traditional far-right movements and the new Identitarian Movement can be found on the social media channels of Identitarian bloggers and activists such as Austrian Martin Sellner. Sellner fits neatly into the description we started with: a young white man you might expect to spend his days in the offices of a middle-class firm, not on meetings of right-wing activists. While representatives of other far-right groups merely have social media channels and still rely on the traditional way of rallying against migrants and Muslims, Martin Sellner has thousands of followers on YouTube, Facebook, Twitter and Instagram. In his vlogs and Instagram stories he talks about the dangers of multiculturalism and the growing threat refugees and migrants pose to the European way of living. Sellner is not a racist or Nazi – that’s what he would say if you asked him. The new generation of right-wing activists knows how to communicate with their followers in a way their followers will understand the underlying racist assumptions while at the same time being able to deny all accusations of racism by liberal media.

This includes a great variety of forms of protests conducted by the Identitarians.In November, the Movement started organizing events to commemorate the victims of Islamist terror in Europe. Not to fuel anti-Muslim sentiments but to give the victims a voice to be heard- that’s what they say at least. One month earlier, “Generation Identity” as they call themselves in the UK unveiled a banner on Westminster Bridge at the heart of London demanding “Defend London – Stop Islamisation”.

Last summer, the Movement launched mission “Defend Europe” as a reaction on the ongoing refugee influx through the Mediterranean Sea. A ship was chartered to collect evidence that European NGOs that save refugees from sinking ships work together with Libyan human trafficking rings. The Identitarians say they do this for the sake of the refugees themselves: without traffickers crossing the Mediterranean in overcrowded boats and NGOs picking up the trafficked, no one will have to drown in the Mediterranean. On the mission’s website, it is shortly mentioned that this project shall also contribute to stopping “Great Replacement” in Europe. It is not stated what the “Great Replacement” means, but supporters will know that it is about secret plans by liberal governments to create a single European state in which ethnic Europeans will only form a minority. The fear of multicultural “United States of Europe” in which white men are marginalized is a fear lying at the heart of the Identitarian Movement’s ideology, uniting its members in the fight for a “Reconquista”, a term borrowed from the wars against Muslims in Spain during the Middle Ages.

Chances are high this importance will continue to grow in the future.