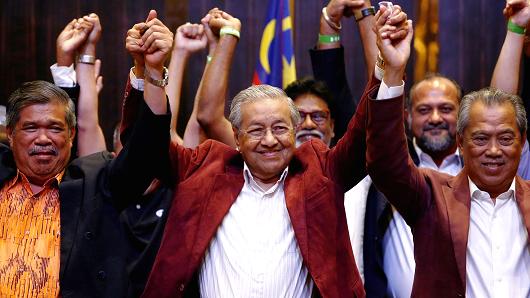 With the surprise victory of the opposition on May 9th, it is the first time since its independence in 1957 that Malaysia has seen a peaceful transfer of power like this. The United Malays National Organization (UMNO) had long been the dominant political force in the country, using its far-reaching patronage system to maintain power and influence. It was a founding member of the National Front (Barisan Nasional) coalition, as well as its predecessor, the Alliance Party (Parti Perikatan). For the first time in over sixty years, it is in the opposition, with the electoral success of the Alliance of Hope (Pakatan Harapan) that allowed them to gain a parliamentary majority in Malaysia’s second chamber. According to official results announced on May 10th, the Alliance of Hope won 113 seats – one more than required for simple majority – and the National Front has 79 in the 222-member parliament, compared to 133 seats just five years ago.

Ironically, the vanguard of this democratic transition in South East Asia is former strongman Mahathir Mohamad, who is known as the father of Malaysia’s modernization. Having served as prime minister between 1981 and 2003, he came out of retirement to take on his former protégé, Prime Minister Najib Razak. The now-ousted prime minister and his political allies are embroiled in a massive corruption scandal involving alleged siphoning of state funds from the 1Malaysia Development Berhad (1MDB), a strategic development company, the goal of which was to turn Kuala Lumpur into a financial hub and boost the economy through foreign direct investment. Although Razak and his government were relatively unpopular for issues relating to the economy and governance, it was nevertheless a considerable challenge for the opposition, for a number of reasons. Systemic barriers against the opposition were present, created by the ruling party’s manipulation of the legal system and electoral commission. Moreover, the opposition had to build electoral support across sectarian divisions that are characteristic of Malaysian society and coalition members had to cooperate with each other to build a viable and successful politcal alliance. The comeback of Mahathir as what some political commentators are calling “a savior of democracy” is curious, as “Mahathir [had] inspired the opposition political movement he now spearheads after he was accused of weakening the judiciary, jailing critics and shuttering newspapers”, writes Laignee Barron in Time magazine. While Mohamad’s democratic track record is less than stellar, he has publicly recognized his failures in the past and struck a tone of reconciliation towards former political rivals, as the release of twice-imprisoned leader of the Alliance of Hope, Anwar Ibrahim, exemplifies.

The consequences of the electoral success of the Alliance of Hope have implications that go beyond the borders of Malaysia. Through its controversial “One Road One Belt” initiative, China has sought to extend its influence by establishing trade links and embarking on infrastructure projects throughout Asia and beyond. While the previous Malaysian government had been largely receptive of such foreign direct investment, Mohamad has seized on the popular apprehension towards Chinese money flowing into Malaysia, telling Reuters in an interview that Chinese are “coming in here, buying land, developing luxurious towns, [and it] is not beneficial for us. Quite definitely, we will review.”

The National Front’s dominant party, UNMO, now joins the ranks of autocratic parties deposed by democratic means, such as the PRI of Mexico, the KMT of Taiwan, and the ANR-PC of Paraguay. It would be a mistake to characterize this change in government as a blossoming of democracy, as the victory of the Alliance of Hope came about despite systemic barriers to democratic practice that have long existed in Malaysia. Nevertheless, the unexpected victory of the opposition signals beyond the shadow of doubt the desire for change among Malaysians and offers a glimmer of hope for the future of democracy both in Malaysia and around the globe. Larry Diamond, a leading political sociologist at Stanford University, told the Wall Street Journal, “What has happened in Malaysia tells people: Even if it’s not a level playing field, don’t give up. There is no reason to give up on democracy. There is still a lot of democratic ferment in the world.”