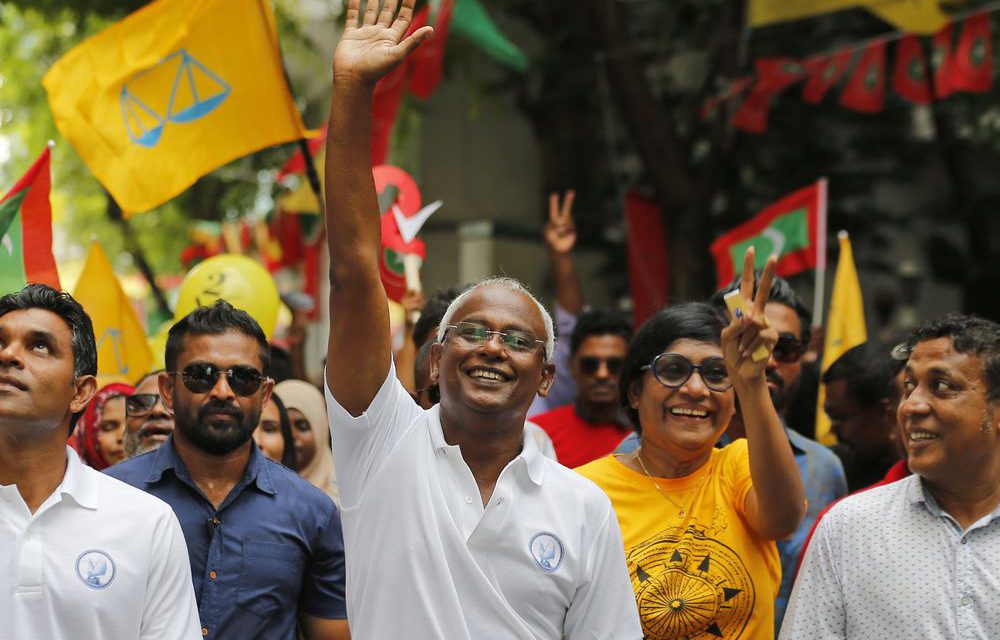 The word ‘Maldives’ evokes pictures of paradise in the collective imaginary. Yet, there beyond the turquoise lagoons, coral reefs and palm tree hammocks, hidden from the tourists’ eyes, unfolds a somewhat different tale – a tale of the struggle between democracy and authoritarianism, a tale of the contest for influence between two of Asia’s most powerful tigers – China and India.

The September 2018 electoral triumph of Ibrahim Mohamed Solih signals hope to the inhabitants of this Indian Ocean island republic. Seemingly, the struggle for the mode of government has been won by democratic principles. Voted out of office, the still incumbent president Abdulla Yameen, whose era is synonymous with corruption scandals, suppression of civil rights and press freedom, and human rights abuses, conceded defeat after his attempt to challenge the election result at the Maldivian Supreme Court emerged to no avail.

Yameen’s legacy is complex – it was during his term that the archipelago’s foreign policy shifted from its historic ally of India, to a more distant, but cash and influence savvy member of the global community – China. Yameen’s Maldives saw the realisation of infrastructure projects, such as the expansion of Malé International Airport, land reclamation ventures and the construction of a causeway linking the two islands of the capital city. Likely, the island nation would not have achieved such development on its own. Chinese capital, machinery and labour made the task much more manageable.

Hence, an important question arises – what implications will the new Maldivian democracy have upon internal Maldivian affairs, and the mutual relations with China and India?

The accomplishment of Solih’s coalition may feasibly complement the incomplete work of the first democratically elected Maldivian president, Mohamed Nasheed. With many dissidents exiled or imprisoned, the soon to rule polity hints that the democratisation of the Maldivian constitution is in order. Such reform could entail the release of political prisoners, bolstering press freedom and initiating legal action countering human rights abuses and corruption. The reorientation of the country towards the Indian sphere of influence is also likely. However, Solih must ensure the victorious coalition’s cohesion to prevent the re-emergence of manifestly authoritarian activity and guarantee the judicial system’s independence.

The consequences of recent transformations in Malé upon Chinese investments and bilateral relations are complicated. Within the Belt and Road Initiative, China invested $1.3 billion into Maldivian infrastructure projects, an amount that the tourism and fishing based economy will struggle to reimburse. Solih will need to maintain positive relations with China, ensuring the fate of the Sri Lankan port of Hambantota does not meet Maldivian harbours in the process. Though the president elect clarified that using the Maldives for furthering Chinese maritime policy in the Indian Ocean is not on his agenda, existing agreements will form key considerations in determining future Sino – Maldivian relations.

Finally, we turn to India, a country that has so far seemed disconnected from the polemic at hand. Yet, its geographic proximity to the Maldivian archipelago demonstrates otherwise. Historically, the relations between China and India were bittersweet, their modern rivalries (and military ambitions) kept mostly at bay by the mighty Himalayas since 1962. The only barrier between the Maldives and India is 700 kilometres of ocean – the last thing New Delhi needs is what could effectively become a Chinese naval base on its southern maritime border. Such geostrategic concerns constitute that democratic, pro-Indian developments in the Maldives are welcomed by Modi’s government. Solih recognises and promotes the value of future partnership with India, signifying that upcoming Maldivian policies will need to be calculated, and measured.

A democratic future of the Maldivian archipelago is marred by numerous caveats. The Maldivian people, having been denied justice for so long while facing an existential threat in the form of rising sea levels, undoubtedly deserve it. It will constitute a readjustment of Maldivian interactions with India and China, which will in turn affect Sino – Indian relations. At this moment in time, the world ought not turn its attention away from the country, for Solih’s victory will be instrumental in determining how Maldivian, Chinese and Indian interests are ultimately balanced – or not.

A collection of New York Times articles about the Maldivian situation in general: https://www.nytimes.com/topic/destination/maldives