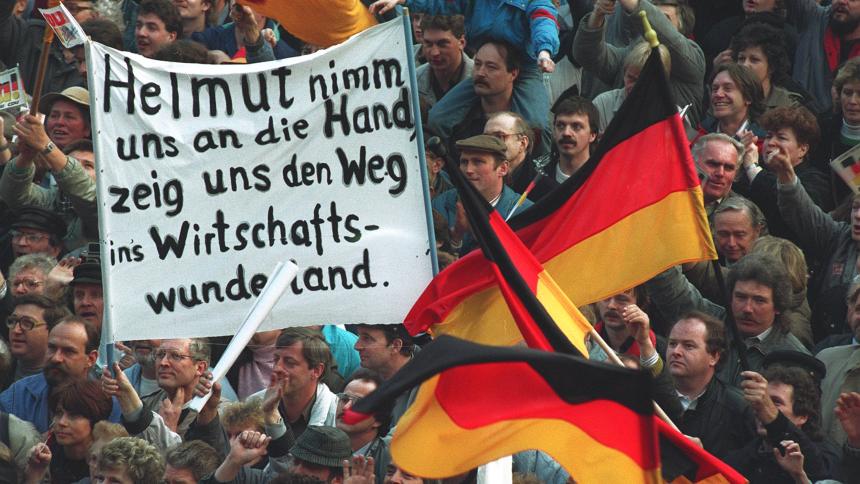 If in 1989, one were to ask the people of East or West Germany what separates the one from the other, the answer would have been robust and straightforward: The Wall. Although the separation between the two former states is not as clear cut anymore, it becomes increasingly evident that the physical barrier was not the only thing dividing the East and the West. Notably, the recent electoral success of extremist parties in regions that constituted the former German Democratic Republic casts a shadow of doubt over the shining success story of the German reunification.

While the night of the 9th of November 30 years ago was marked by a feeling of hope for a better future, today these hopes have transformed into bitterness, and the former wind of change turned into a whiff of disappointment.

This disillusionment became painfully apparent in the latest regional election in Thuringia, where more than half of the electorate voted either extremely right- or extremely left-wing. The disappointment also manifested itself in the way people disregarded Germany’s two currently governing parties. While Angela Merkel’s CDU dropped 12% in comparison to the last elections in Thuringia, her coalition partner SPD reached an all-time low of 8% of the total vote count. A worrying development, in which the election in Thuringia is by no means an outlier. It was only the latest of three elections in the former communist East of Germany that, with slight variations, had one thing in common: all outcomes showed remarkable support for extremist parties, which is uncommon for elections in any other part of the country.

This difference in voting shows what studies have been indicating over the last years, namely, that the former East Germans distrust the governing parties in Berlin and seem to be alienated from the rest of the country. But why is this the case? After 1990, a vital objective of the German government has been to strengthen solidarity and invest in the development of the East. While this is the case and former communist regions have been catching up over the previous decades, the West remains ahead in many crucial aspects such as the economy and representation in the particular spheres of the political system.

Although it is true, for instance, that the East has been making significant economic progress, it is also true that its GDP per capita remains 20% lower than in the West. The fact that only 27 of Germany’s 500 most prominent companies are based in the former GDR adds to this rift and makes more progress unlikely. These numbers have left many people with the feeling that they will never fully catch up with the West. A feeling that has recently only been enhanced by developments that hurt eastern growth. The fact that the most critical and innovative branches of industry are located in the West has, for instance, lead many well educated young people to leave the East and resettle in the West. This brain drain and the increasing lack of prospects in conventional eastern manufacturing or mining jobs is fertile ground for populist parties offering straightforward solutions for these complex problems and an alternative to the established parties that are often blamed for this development.

Adding to this feeling of economic discontent is a range of political imbalances that leave some people from the East with the feeling of being a second class citizen. Many aspects of the German political system show, for instance, that the new regions were only added to an already functioning political system that had been working on its own for 45 years. This discrepancy becomes apparent when one takes the number of federal agencies per region into account. While the eastern states account for 20% of the overall population, they only inherit 5 of the country’s 78 federal agencies. Likewise, only a small proportion of high ranking officials of the German government, with the notable exception of Angela Merkel, originate from the East. This symbolic lack of representation in Germany’s political elite adds to the feeling of alienation that increasingly marks the relationship between the federal government and eastern Germans.

Thirty years after the wall fell, it seems like East and West are growing apart rather than together. While the electoral results in the East are traceable to underlying issues between the new and the old federal states, those issues are rarely discussed in the German political discourse. The sentiment in the West is focussed on economic aspects and maintains that the East benefited from support programs after 1990 that enabled them to fully catch up to the standard of the states in the West. Rather than understood, eastern Germans are often stigmatized based on the considerable support for radical parties, and explanatory variables are buried under the mantel of a thoroughly successful unification. Perhaps the recent elections should serve as a reminder to re-evaluate the relationship between the German East and West, particularly in light of today’s anniversary.