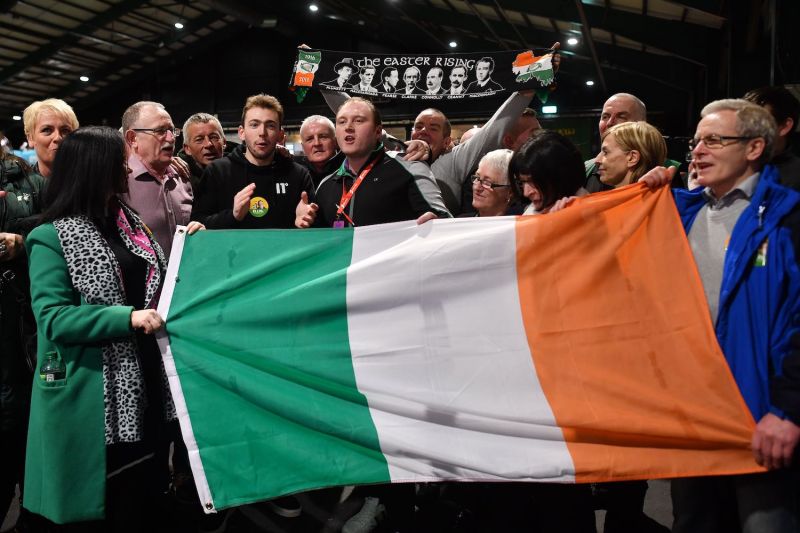 On Saturday the 8th of February, the 2020 Irish general election took place which produced an outcome that dramatically altered the dominant political players on the island. For the past century – and since the granting of independence in Ireland – politics have been dominated by the centrist-rivals Fine Gael and Fianna Fáil. Both parties’ political roots are founded in the Irish civil war, which occurred as a result of the sharp divisions in public opinion about the Anglo-Irish treaty (1921). This treaty was signed following the War of Independence, where the British government granted dominion status to Ireland in addition to solidifying the partition between north and south of Ireland. Despite the original positions of both parties being radically different, many today consider them to be identical in their policies and in their aim of serving the interests of a small portion of the population, namely the upper class.

In contrast, the third largest political party is the left-wing republican party Sinn Féin (SF). For decades – following the Troubles in Northern Ireland – SF has been labeled the ‘political wing of the IRA’ which has proved a huge impediment to the party in their attempts to grow in popularity in the south of the island. In the previous 2016 general election, SF acquired 13.8% of the vote. While it made them the third largest party, they were still far from securing a majority and being considered a major political player. During this time, they were led by Gerry Adams who is a strong republican politician and served as the President of Sinn Féin between the years 1983-2018. Adams played an imperative role in the Good Friday Agreement (1998) which established power-sharing in the Northern Ireland parliament Stormont. During the 2016 general election (and for all of Adams’ political career) media coverage on the party was mainly overridden with claims of terrorism and constant comments on Adams’ past ties to the IRA, without much focus on SF policies and their manifesto. In 2018, he decided to step down as president of SF and was succeeded by Mary-Lou McDonald.

The result of the 2020 general election came as not only a shock to FG and FF, but also SF who rose from 13.8% to 24.5%. SF received the highest percentage of first-preference votes across the country, with certain candidates achieving 10,000 surplus votes in some constituencies. However, although SF won the popular vote, they did not run enough candidates to secure a majority and ultimately achieved 37 seats. Due to Ireland’s proportional representation system (PR), many of SF’s surplus votes went to other candidates. FF achieved a total of 37 seats making them the second largest party. Also, for the first time in the history, FG are the third-largest party with 35 seats. It is also interesting to note that the current Taoiseach (prime minister) Leo Varadkar (FG) was the first outgoing Taoiseach who failed to get re-elected on the first count, and ultimately did not win his seat until the fifth count. The Taoiseach was out-polled by SF councilor Paul Donnelly who was elected after the first count.

Ultimately this raises the question: Why, after a century of a rigid two-party system, has the Irish electorate decided to radically change their voting preferences? One popular explanation has been that this is simply the youth acting in defiance against the establishment. Some older people believe that because young people were not around during the Troubles, they have forgotten the pain and death that occurred during that time. However, it is pertinent that consideration is given to the fact that the majority of SF politicians are too young to have any direct connections with the events of the Troubles. Additionally, another important point is that although SF appeared to be the most popular party amongst young people (based on the exit polls), the sheer number of votes they received cannot be reduced to only young people. It is also dangerous to paint the youth as ignorant and uneducated, who have only voted for SF to avoid giving their vote to  FF and FG. What this election actually suggests, especially when looking to the growth of other left-wing candidates (namely the Greens) is that Irish people will no longer settle for the limited choice of two center-right parties and that duopoly that has existed for too-long in Ireland has been forever smashed.

Many people are resonating with SF’s health and housing policies which have become contentious issues under Varadkar’s government. However, SF also have as their core objective a far more ambitious goal: the reunification of Ireland. They have long believed that the separation of Ireland is an illegitimate vestige of 500 years of callous domination from Britain. Until this election, their hopes of reunification was considered nothing more than a republican fantasy. Now, it is possible they could call a referendum on reunification in the south if they went into government. However, in the north, the decision is ultimately not theirs to make. Under the Good Friday Agreement, the vote for reunification can only be called by the NI Secretary of State which is currently held by a Unionist Brandon Lewis. If it does appear that a majority of people wish for a referendum, he is obliged to call it. Naturally Brexit has played a role in the shift of public opinion about Irish unity, but there is also another important element: the Northern Irish 2021 consensus is likely to confirm that there are more Catholics than Protestants for the first time in history. Again, it is unclear as to whether Irish unity is in the for-seeable future for Ireland, yet it is undeniable that most signs are showing that the country is inevitably moving in that direction.

So, what happens now? As suggested above, no party is close to the 80-seat majority required to enter government. Most avenues being pursued by the major political parties are coming to a dead-end with coalition talks breaking down between all parties. Next Thursday the 33rd Dáil will meet for the first-time post-election. Although a cloud of uncertainty currently surrounds the Irish political system, it is undeniable that these election results show an exciting shift in the Irish political landscape. Despite whatever you may personally believe, nobody can deny that Irish politics have been changed forever by the rise of Sinn Féin. As for now, the shape of the next Irish government is anyone’s guess. But one thing is certain; the Irish electorate has made a strong demand for change, and it is up to the political parties to listen to that demand.