A Syrian refugee enjoying a one-way ticket to the Netherlands? 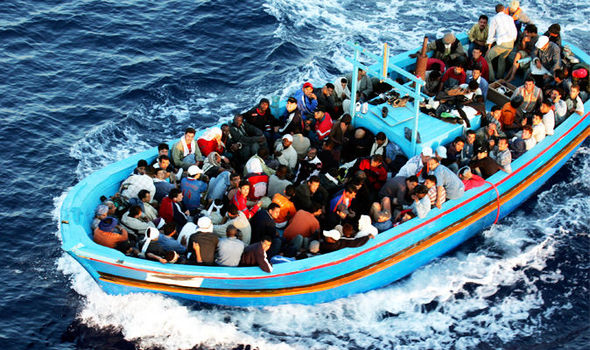 Since the outbreak of the civil war in Syria in March 2011, about eleven million Syrians have fled their homes. An estimated one million have requested asylum in Europe. One of them is 24-year-old Muhammed from Damascus.

When the the civil war began, Muhammed was obligated to serve in the army. He received a letter from the government, wherein President Assad invited him to join the army. In fact, this was not an invitation, but an obligation. Even though he knew that there were considerable consequences, he refused to become a soldier. In retaliation of his rejection, the state imprisoned not only Muhammed, but his uncle too. During their imprisonment, he and his uncle were not allowed to have contact with each other, and they were they not allowed to see or talk to their family and friends. However, Muhammed was lucky: he was released from prison after five days. His uncle on the other hand, was not allowed to do so. Almost 6 years after the imprisonment, Muhammed’s family still has not heard anything from Muhammed’s uncle. According to Muhammed, his uncle’s story is not uncommon: men disappear every day. When a boy turns eighteen, he loses his safety. Wherever you are, you can be brought to a halt by soldiers. Either you become a soldier or you will be imprisoned. The people who are imprisoned ‘disappear’. Contact with friends or family is prohibited. In most of the cases, the family receives a letter from the government at some point, stating that their husband, father or son has died due to an illness or accident. These families are the ‘lucky’ ones: they know that their loved ones are now resting in peace. Some families do not hear anything about their relative: they are living in uncertainty for the rest of their lives. This has become part of the daily lives of the Syrian people: it is normal that people are imprisoned for no apparent reason. People in Syria disappear every day: it can happen to anyone at any moment.

“These families are the ‘lucky’ ones: they know that their loved ones are now resting in peace.”

With the disappearance or silent murder of Muhammed’s uncle, two little children and his heartbroken wife are left alone. This incident was the last straw for Muhammed. With Assad in charge, Syria was no longer a safe place for him and his family; he decided to flee the country. Together with his brother and his two sisters, Muhammed started a journey towards a ‘peaceful and happy life’. Their first destination was Egypt. “Shortly after our arrival, I found a job in a phone shop. As Syrian man, I was used to work hard. However, I was just 18 years old and I really wanted to get my degree. In Syria I used to study a lot. I did a high-school end exam twice, but I failed both. I think the education level in Syria was just too high for me. My mother on the contrary, claims that I just skipped too many classes (yes Syrians play hooky as well). Back to the point: I decided to take classes again and this time I graduated in Information and Communication Technologies. So all by all, I lived a pleasurable and normal life in Egypt.” Nevertheless, Muhammed and his siblings decided to leave Egypt after Al-Sisi was chosen as new president of Egypt during the elections in May 2014.

Europe seemed to be their best option, so they decided to take the boat to Italy. The boat trip brings up bad memories for Muhammed: “The boat was overcrowded and the conditions were terrible. There was not enough food, nor were there enough beds, but we were satisfied: Europe would bring us a better future.” After their arrival in Italy, Muhammed and his siblings decided to split up: his two sisters would continue their travel to Germany and Norway, while he and his brother would go to the Netherlands. The next day, they took the train to France, where after they traveled via Belgium to the Netherlands. “Finally, after nineteen days of traveling, our journey had come to an end. The Dutch people received us and housed us in detention centers.”

“The boat was overcrowded and the conditions were terrible. There was not enough food, nor were there enough beds, but we were satisfied: Europe would bring us a better future.”

At the moment, Muhammed has already been living in the Netherlands for more than two years. He rents a house, studies at the University of the Hague and works as a delivery man. Of course, Muhammed is not able to pay his rent, bills and tuition fee with just his wage. He therefore receives money from the Dutch government. The fact that refugees are receiving money from the government angers many European citizens. However, it must be said that these refugees did not choose this situation themselves. Muhammed said the following about it: “There is a difference between what I want and what is possible for me. To be honest, I prefer to go back to Syria: I miss the mountains, the sea, my friends, my family. However, Syria is not what it used to be: my friends are dead or have fled, universities are closed, shops are closed, the cities are destroyed. Besides, Assad is tough on refugees. Going back to Syria, would mean my death or a lifelong prison sentence. On top of that, I am not even able to go back to Syria, because I lack the required Syrian citizenship. In fact, I lack citizenship at all since I am stateless. This is due to the fact that my father is from Palestine. When he moved to Syria to marry my mother, a Syrian women, the Syrian government refused to give him a passport. Since the Syrian government does not accept him as Syrian citizen, the government did not want to register my birth and thus I lack citizenship too. All by all, my best opportunity is to stay in the Netherlands for the rest of my life. In three years the Dutch government is going to decide whether I am allowed to stay or not. When I am lucky, I will receive a Dutch passport and thus the Dutch citizenship. In case I am not, I will just roam through Europe, till I find a country that does give me citizenship.”

“To be honest, I prefer to go back to Syria: I miss the mountains, the sea, my friends, my family. However, Syria is not what it used to be: my friends are dead or have fled, universities are closed, shops are closed, the cities are destroyed.”

Muhammed’s journey to a peaceful and happy life is just one of the many stories of Syrian refugees. Muhammed made it safely to the Netherlands, but in 2017 there are already 256 refugees who died or disappeared during their sea-crossing, according to The UN Refugee Council. On top of that, according to the UN High-Level Panel on Threats, all human beings share responsibility for each other’s security. Consequently, the European citizens also share a responsibility for the security of Syrians. It is questionable whether the global environment fulfills this obligation. In fact: “Refugees are part of humanity and we can’t leave them behind.”