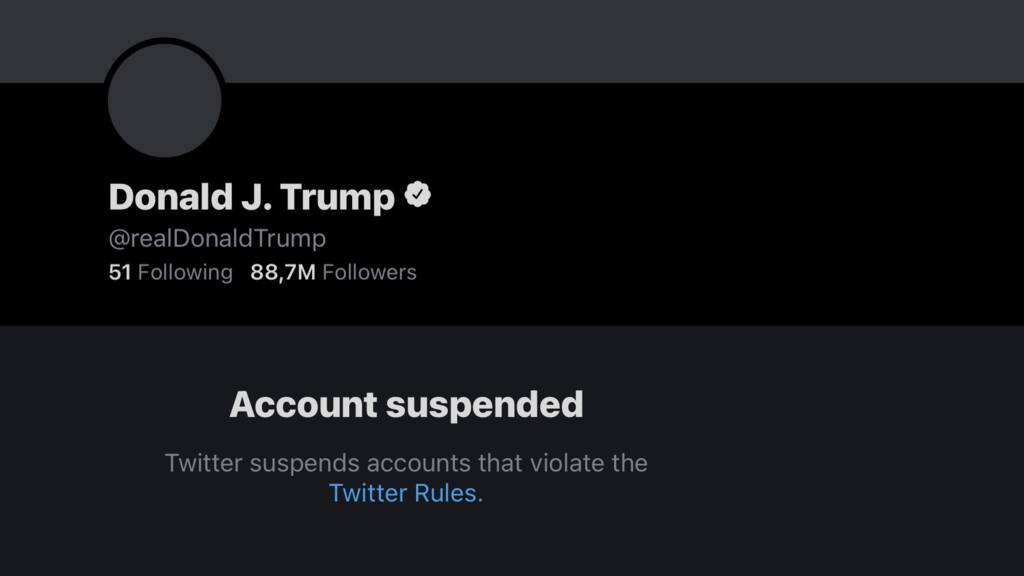 Although the invasion of the U.S. Capitol and a historical inauguration to follow it became immediate world news, less attention has been given to other results of this violent act against democracy. Big Tech firms such as Facebook, Amazon and Twitter, using the argument that former-President Donald Trump had been inciting violence on his notorious social media accounts, chose to ban his accounts for violating ‘community guidelines.’ While many users seemed happy to see him go after a period of four years in which he had been spreading misinformation, it is important to stop and think which community exactly these firms represent and serve. Although they claim their actions are in support of democratic values, is it even up to them to take such drastic measures? Private individuals and corporations are now influencing what information is accessible on their platforms. Although the bans can be seen as a legally sound and perhaps a positive development, there are also many downsides to letting private corporations control the new political stage of our century. Are we aware of the power and influence we are giving away?

As IR students, most of us are familiar with the idea of framing (international) organisations either as stages or as actors. If an international organisation is seen as a platform, it is only a facilitator of international communication and coordination. We can also give the organisation more power, viewing it as an actor, which can also strive after its own goals and not necessarily those of their individual member states. Applying this same idea to Big Tech, the question becomes whether platforms such as Twitter and Facebook just exist as a means of practicing free speech, or whether the platforms have a responsibility for what they allow to be put out in the world.

The recent bans, going further even than initial attempts of ‘flagging’ misinformation and glorification of violence, seem to be more in line with the latter. In a statement by Zuckerberg, Facebook’s actions are explained as a response to a ‘fundamental change’ in the gravity of the situation, the platform now fearing ‘insurrection’ and the possible prevention of a peaceful transfer of power to a democratically elected government. Next to Trump there are many other examples, such as Facebook blocking Myanmar’s top general after reports of genocide, as well as other leaders in US sanctioned countries. It seems the social media platform sees itself as playing an essential role in the facilitation of democracy.

Over the last several years, we have allowed President Trump to use our platform consistent with our own rules, at times removing content or labeling his posts when they violate our policies. We did this because we believe that the public has a right to the broadest possible access to political speech, even controversial speech. But the current context is now fundamentally different, involving use of our platform to incite violent insurrection against a democratically elected government.

However, even if we agree Big Tech has a responsibility for what is shared on their platforms, it is still important we hold them accountable and demand insights into how content is evaluated. Violence can never be justified and social media should not be used to kindle the fires of hatred, but allowing Big Tech to identify all content for us bestowes upon them an incredible amount of power, as well as a specific right to do so. They would be judging what is in favour of democracy and what is not, what is in the interest of the public to remain accessible and what is not. Although Facebook is a global platform, it still holds onto American (political) values. Do the banned political leaders from abroad not have the same right to communicate to their peoples? Hezbollah, for instance, is banned from the platform due to being designated as a foreign terror organisation by the U.S. government, but currently holds seats in the Lebanon parliament.

In conclusion, there is still a lot to figure out in establishing new rules regarding social media and the political stage it provides. However, rather than depending on Big Tech to figure this out, we must ask ourselves what is in our interest. Although Big Tech tries to frame their efforts in the benefit of the consumer, this is not the time to be naïve. Content violating ‘community norms’, misinformation and incitement of violence need to be monitored and possibly deleted or banned, however we must be very cautious, evaluating the true (underlying) motivations of Big Tech. Letting the ‘market’ take care of the policing of the internet results in a too vulnerable protection of our democratic values. How else can we explain the sudden switch in attitude, just as Trump’s time in office is coming to an end? If we really want to maintain democratic environments on the internet, we should let the community which Big Tech aims to serve (us, its users) decide the guidelines of implementing moderation, and take back control.