How smart cities are revolutionizing how we tackle heat 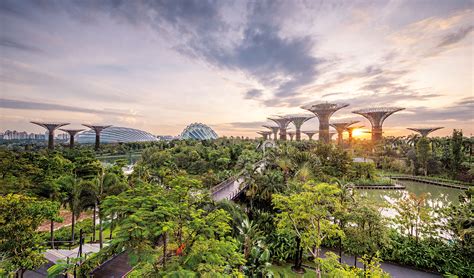 A cooler look at Singapore

Heatwaves are becoming an ever-increasing threat to humankind. A new study shows that by 2100, heatwaves may threaten as many as three in four people, and even if emissions are lowered, still every 2 in 4 people face that same kind of risk. From data across 1,949 cases, lethal heat-waves have been documented in cities like New York City, Washington, D.C., Los Angeles, Chicago, Toronto, London, Beijing, Tokyo, Sydney and Sao Paulo. They are exacerbated in metropolitan cities due to the urban heat islands effect. Urban heat island effect is when dense metropolitan cities are warmer than the rural areas around them. This increased heat is caused by us, our cars and all activities around us. This heat sadly lingers between buildings because of reduced air flow and circulation, and reduces air quality and even water quality

This may seem seriously dangerous but there is actually an ingenious solution to this problem, and that’s nature! Using natural fauna and flora can be-green city-scapes and resultantly reduce higher temperatures. Building and street surfaces aren’t as harsh then and trees can provide a canopy for air to cool down! Green Infrastructure is definitely the way to go and some cities are developing smarter solutions and technologies to cool their cities down.

Singapore is leading the green infrastructure revolution by expanding its green canopies over the city and using sophisticated technologies towards more habitable urban life. With temperatures already high in the region, Singaporeans already co-inhabit the spaces they live in with air conditioning, and as the effects of the climate crisis increase, they have had to think of smarter solutions. One of the big steps they’ve taken to keep temperatures down is the use of an underground district cooling system. Using a large central plant, they cool water and distribute it into over two dozen buildings including the world-renowned Marina Bay Sands complex. This system is 40% more energy efficient than conventional air-conditioners and Singapore isn’t finished. They plan on planting an additional 1 million trees across the city and develop newer greener areas, not only to reduce the urban heat island effect, but also to connect its inhabitants to nature.

The Singaporian government aims to demonstrate the effectiveness of its new ideas with their most recent green project: Tengah. Tengah will be Singapore’s first smart eco-town, aiming to create a living space for roughly 42,000 homes, all driven by the wonderful central air conditioning unit that is nature. Additionally, the new settlement will combine digitalisation with sustainability, introducing automated waste collection, smart traffic lighting, and applying sophisticated computer simulation to optimize the design of the town as a whole. Tengah will also feature a completely car-free town center, providing walking and cycling routes across all the different districts. As you can probably tell, the goal is not only to retain a cooler city, but also to reduce greenhouse gas emissions and ultimately encourage residents to adopt more environmentally friendly habits and behaviors. The key features of Tengah are designed to revolve around nature and community, hoping to set the tone for an increasingly urbanizing Asia, and indeed the world. If all goes according to plan, Singapore will be the leading example of Green Infrastructure through their digital-sustainable approach, and could prove to offer real solutions for the threat of urban heat worldwide. This is just one example of Asia’s initiatives at green infrastructure could shape how we live and coexist with nature.

By Paul Schamp and Viktor Bruyn