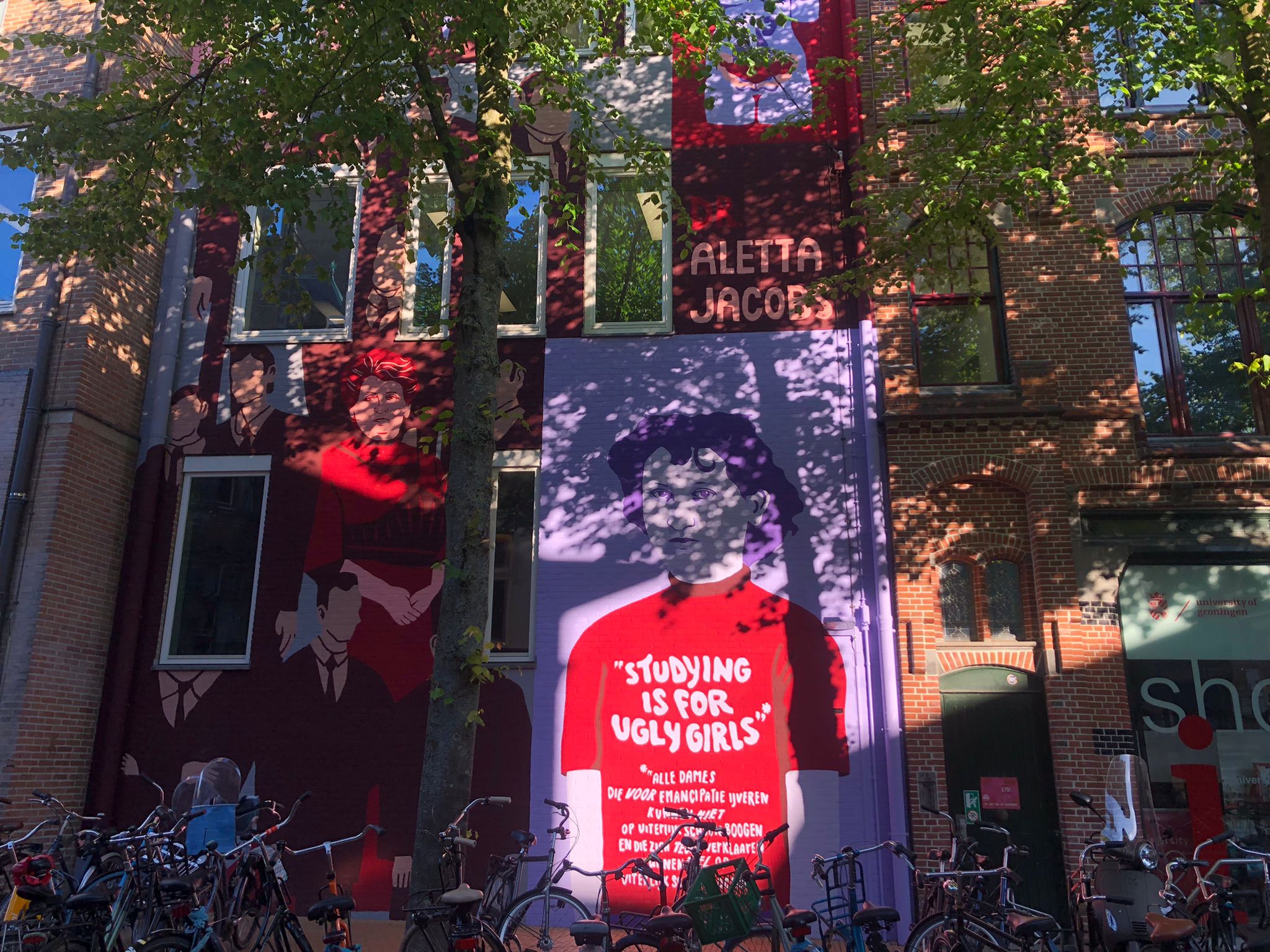 For those students that, like me, walk past the Academia building or the Harmony building multiple times a day, it has been hard to miss the new mural of the hero of the Rijksuniversiteit Groningen; Aletta Jacobs. Surrounded by male students both during her life and now on the wall of the UB, Aletta Jacobs fought for the right of women to be able to go to university just like men. Nowadays she is still seen as a Dutch feminist icon for her actions that created progress for women in multiple aspects. She fought for the right to education, voting right for all women, contraception, and attention to sexually transmittable diseases, especially among prostitutes. However, in letters she wrote while travelling, a clear colonialist and racist view is noticeable in Aletta’s words. Who was Aletta Jacobs, what did she mean for Dutch women, and should we want to have murals and statutes all over Groningen of her?

As almost all Dutch people know, Aletta Henriëtte Jacobs was the very first woman to acquire a university degree in the Netherlands. She obtained her doctoral degree as a general practitioner in the year 1878 at the University of Groningen after passing her licensing examination. A not so known fact is that she was not the first woman to attend university, just the first to get a university degree. Anna Marie van Schurman went to the University of Utrecht in 1636 and was the first woman in the Netherlands to take university classes. She had to do this behind a curtain so as not to ‘disturb’ the male students.

Nearly 250 years later, Aletta Jacobs grew up thinking it was rather unfair that all her brothers were allowed to follow higher education, but she was not. In 1870, she was the first woman to be allowed to go to the ‘hogere burgerschool’ which is similar to high school. A year later, when she was just seventeen she wrote a letter to the Dutch minister Thorbecke and asked him if she could go to university. His response, addressed to her father, informed the family Jacobs that Aletta would be allowed to go to university. Jacobs was granted a trial year at the University of Groningen and ended up becoming the first Dutch female doctor.

Her first years as a doctor were spent trying to make less fortunate women’s lives better. She opened a clinic in Amsterdam for women and children and gave biweekly clinics to advise poor women and prostitutes on health and hygiene. While working she realized more and more that most women were living or working in conditions that weren’t good for them, such as working for entire days on their feet without a break and having children every year. She became one of the first doctors to believe in the advantages that contraception would bring to the health of women, but also infants. After holding a successful trial with diaphragms, she was convinced that it would be helpful to her patients.

After realizing this, Jacobs founded the first clinic in the world that focussed mainly on providing information on contraception and becoming a mother safely. During her free clinics, she not only provided information, but also a free contraceptive device. This biweekly occasion was very well-visited by poor women who did not know a lot about their own health. Many of her co-workers, even female ones, criticised Aletta for interfering with God’s ‘divine plan’. However, Aletta continued to provide them, claiming she did it in the name of public health.

This was not the only issue that she fought. When she found out that women were technically not banned from voting, she wrote a letter to the mayor of Amsterdam asking him why she could not vote. After taking the issue to many different courts, it was eventually ruled that married women could not vote because they did not pay taxes. Despite the fact that Aletta Jacobs was an unmarried woman, she still was not allowed to vote. In the following year, Jacobs became president of the ‘Vereeniging Voor Vrouwenkiesrecht’, or in English ‘Association For Women’s Suffrage’. She continued this post till after women were granted the right to vote in 1919.

When talking about Aletta Jacob, it is important to not gloss over an important part of the time that she lived in; the colonialism of the Dutch kingdom. Between 1911 and 1912, Jacobs travelled through South Africa and what was then Dutch India, which is now Indonesia. She wrote letters back home, and in these letters, her colonial and racist view of other countries and other people is clearly visible. The writing shows a clear feeling of entitlement to colonies, and what to her was the undeniable fact of the superiority of Europeans. Remarkable is that while she spent her entire life fighting against the power structures that discriminated against women, she failed to do the same for those living under other power structures.

Aletta Jacobs was for her time very progressive in her thinking and acting around the rights of women. She did not limit herself to only fighting for the right to education but went on to fight for contraception, worker’s rights, voting rights, and safe working environments for prostitutes. It is a fact that as one of the first advocates for contraception she changed the lives of a lot of women, not just in the Netherlands but all over the world. However, this does not erase the views that she held about people from Asia and Africa. Instead of using her voice to also fight for other people, who just like her did not have the political freedom they wanted, Jacobs reinforced colonial views. It is important to honour Jacobs for what she meant for women, while also remembering what part the Netherlands, and consequently rich Dutch families, often have played in history.

As for the mural, we can still realize what Jacobs meant for women in a time when a seventeen-year-old girl had to write a letter to the minister of Internal Affairs to be able to go to university. Which is why I still want to add the words that she wrote in her autobiography at the end of her life;

“I feel happy that I have seen the three great objects of my life come to fulfilment during my life … They were: the opening for women of all opportunities to study and to bring it into practice; to make Motherhood a question of desire, no more a duty; and the political equality for women.” (Memories, 1996)